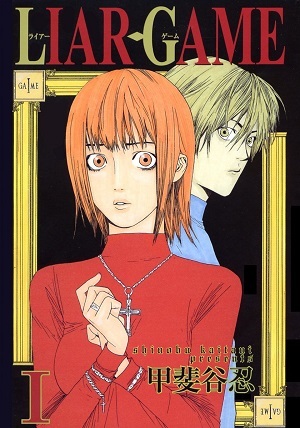 Story: Liar Game starts off with a simple enough concept. A girl gets a package in the mail from the "Liar Game Corporation" full of 100 million yen, and finds out that she is playing against her old teacher. At the end of the month they each have to pay 100 million yen back to the LGT... but the catch is, if you can steal the other person's 100 million yen, then you get to keep the extra and the other person gets put into debt that they can't possibly ever pay back.

So the girl, Nao Kanzaki, gets easily tricked by her old teacher and enlists the help of a mysterious dude named Shinichi Akiyama. From there the two of them progress through multiple rounds of the Liar Game, each round different and more difficult than the last. The winners of the higher rounds win more money than they could have won from previous rounds, but the losers are entered into even more debt.

Art: The art style is nothing notable. It gets the point across in a clean way, but backgrounds tend to be pretty secondary. There are a lot of scenes that just focus on people's facial expressions where the background is greyed out, and the character designs aren't exceptionally note-worthy, aside from the huge range of character designs the manga employs. In many manga, each girl looks indistinguishable from the others save for the hairstyles. However in the Liar Game, it is often easy enough to spot the more frequented characters just by looking at their eyes alone.

Characters: You don't see the main characters outside of the Liar Game often, unless it is mentioning the few days leading up to the new round, anyways. Backstory is sometimes revealed and there is loads of development, showing easily how some people become less selfless or how someone who was an enemy at the start eventually becomes a loyal ally.

Most notable is watching Nao Kanzaki get tougher and (somewhat) smarter through Akiyama's coaching.

Overall: Overall the manga is very interesting, if you like heavily psychological manga. It has a lot of text but the games are so suspenseful with loads of dramatic twists and turns that make it a worthwhile read. For some point of reference, think of the really talkative episodes of Death Note and remove all of the supernatural-ness.

It started off okay and I thought the initial plot was interesting. However, as I progressed, the story just got more and more repetitive and it got to a point where it wasn't as exciting anymore. I personally enjoy reading a manga that not only gets the characters involved, but also the reader. This one didn't quite do that. I admit there seems to be a lot of effort involved in the planning and such, but not as much as I would have liked. There is little to no character development and Nao, unfortunately, continues to remain dumb and innocent. I skipped over a lot of the manga and finally dropped it at chapter 107 (it may have gotten better after that but I couldn't deal with it at this point). It really isn't a bad read, but definitely isn't worth it when you compare it to other, more amazing psychological manga.

So I have heard of this well-known horror manga from The Anime Man who mentioned it a couple of times in his videos. I read it this morning and honestly man, I CANNOT stand Nao. She literally reminds me of Bam from TOG who is also a complete utter simp. The amount of her having pointless meltdowns and always be easily tricked by different opponents she mets, literally grinds me f*cking gears man! I know I can be a crybaby myself when certain things happen but her character was literally all over the place. I've heard people says her personality changes overtime but with all due respect, I will still say she's the worst character I've ever crossed in the manga world lol.....

If only it was just about Shinichi and Yuuji partnering up to play the Liar game together, I would've enjoyed reading it no problem. Although I will admit, the story really did drag for me because a lot of things were going on that really weren't clear. What I'm trying to say here is not only the character Nao let me down but the whole plot of the story as well.

Yeah I mean if you don't mind having a typical wimpy character on a horror manga, go ahead and read this. Dont say I didn't warn you weebs!!!