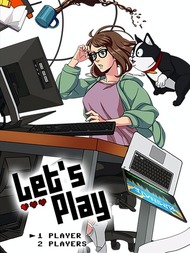 Sam wants to be a game developer, but before her career can get started, a popular gaming personality posts a video of himself playing her first game and gives it a bad review. To make matters worse, she soon finds out he's her new neighbor! A story about gaming, memes, and social anxiety. Come for the plot, stay for the doggo.

Let's see...the main character Sam is your sterotypical cookie cutter, "I don't think I'm pretty but I'm actually super pretty" girl (nerd, glasses, plays video games, but of course has big boobs and a slim figure) who's super shy but everyone loves her anyway...her "love interests" are 1. Marshall, a knock off Markiplier (he's actually a nice guy, but you can't deny the resemblance is uncanny) who the author breaks up with his loving, supportive girlfriend Monica and they "go on a break" (*cough* they're never gonna get back together *cough*) just so he can spend more time with Sam. 2. Link, a guy who's so inept he sister-zones Sam, even after he's literally been crushing on Sam for years and has wanted to date her for forever. 3. Charles, your stereotypical cold, frigid CEO/boss man who eventually warms up to Sam, but only Sam, and he's cold to everyone else. Other than Sam and her love interests, you've got Sam's friends/gaming group (Angela the "fiesty redhead", Vicky the zen/chill Asian friend, Link's rebellious younger brother Dallas, Abe the leader, and Olivia the rich, mute gamer girl and her butler Edgar). Aside from Vicky and Abe (who is black), there's also another POC character Delilah, a black woman who runs a local coffee shop. So all in all, the characters are not very impressive or unique, and rely too heaviliy on stereotypes, and the author does nothing new with her characters. In regards to the story, it's also nothing impressive. Sam is a video game designer, which is interesting, and she creates a game that gets review bombed by fans of Marshall. The author set up an interesting plot in regards to Sam's game, but of course it all gets resolved later on when Marshall properly plays her game, enjoys her game, and streams it. And the company that Sam works at (which her dad owns) will also collaborate with the game site that Sam posted her game on. So that story thread is wrapped up fairly quickly. The rest of the webtoon focuses on Sam's pursuits in love, since it is a romance webtoon. Other than Sam and her love interests (Link, Charles, Marshall), we occasionally get backstory of other characters like Angela, who was sexually assaulted in the past. I do like how the author handled Angela's trauma. I don't like though that Angela is attracted to Link, who moves on to Angela so soon after Sam.   The art for the webtoon is nice, which is one of the main factors I'm sure in why people would read it. But in conclusion, the characters/story are not enough to make up for the art.