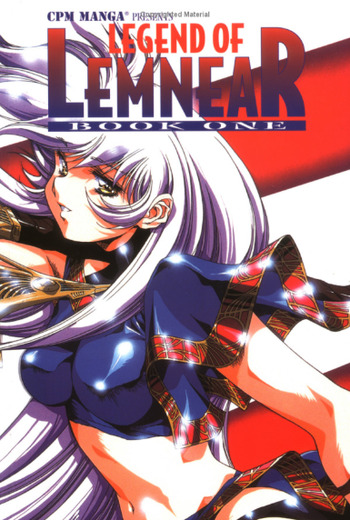 After establishing contact with extraterrestrial civilizations, it was found that humans were the only race to develop various sports. The number of alien sports fans grew dramatically, and the most fanatic of them regularly harass stadiums by taking part in a game, or by demanding a good show, etc. Finally, a treaty was settled, ruling all interferences towards other planets' cultures illegal. Rabbit Force, a group of rabbit-themed henshin girls, became responsible for enforcing the treaty and capturing any offenders.

Simon is a shy and reserved boy who finds change thrust upon him when a new student enrolls at his high school; her name is Nia Teppelin, she comes from a rival school, and she has a crush on Simon! Along with his delinquent friend Kamina and childhood friend Yoko, Simon has become engulfed in a series of strange and wild events including fights with a jealous gang. All the while, Nia’s over-protective father is constantly sending his lackeys to try and bring his daughter back to Teppelin High. Now that Simon has become the center of attention among friends and enemies alike, will his new life be too much for him to handle, or will he do the impossible and face off with gang members to protect his newfound love interest?

On the day before summer vacation, Ichika discovered an old mirror in an old school building. From within it, the mysterious Manatsu looked out and offered to trade favors: if Ichika will do her "homework" (experience the power of the spiritual life forces and write about her feelings) then she will return the charm that Ichika has lost. As Ichika struggles to absorb the raw power of nature, those who watch from the other side of the mirror eagerly await her decision at the end of trials. Can a 14 year old take on the sins of the world and mend the rifts between nature and humanity?

Twenty years prior to the story's beginning, an asteroid headed for Earth destroys Pluto. Due to Pluto's destruction, the asteroid, which is dubbed Thanatos, becomes temporarily stagnant in Pluto's orbit. Now, in order to avoid Earth's impending destruction, the International Solarsystem Development Agency (ISDA) works on the "D-Project", and secretly creates weapons called "Dragons" after finding a dragon egg under the ocean. However, they soon find out that the asteroid is not their only threat, as powerful, destructive dragons from Thanatos appear on Earth.

In this stunning twist on the tale of Code Geass, this alternative reality manga series supposes the following question: What if Nunnally had acquired the Geass power instead of her brother Lelouch? In the aftermath of becoming one with the doll-like energy form "Nemo," Nunnally becomes pilot of the Knightmare frame Mark Nemo and engages in a violent battle with the forces of Britannia. But this is only the beginning of Nunnally's nightmare...

In modern Japan there are seven "Kings" who share power with their fellow clansmen. The Blue King Reishi Munakata, the leader of the Blue Clan "Scepter 4," held great responsibilities on his back. The tower that Gold King Daikaku Kokujōji supervised called the "Dresden Slate" was still on his mind, and he felt a great burden by killing the previous Red King, Mikoto Suoh. On the other hand, the former Red Clan "HOMRA" clansman Anna Kushina experienced the attacks from the Green Clan "Jungle" and awakened as the next Red King. By doing this, she bound her comrades through a strong bond once again. Finally, White Clan members Neko and Kuroh believe that the White King Yashiro is still alive, and seek his whereabouts. However, it was not just them searching for the White King. With "Jungle" once again jumping back into action, the fates of the various Kings are brought together.

Middle-schooler Jimon Asuta is running away from home one night when he happens across a strange girl named Hoshimiya Kate. She tells him that she is the leader of a group bent on world conquest, and he humors her. It soon becomes clear that her talk was deadly serious, and he ends up recruited into the Zvesda organization. However, another organization stands in their way, of which some of Asuta's classmates are members!

Satoshi and his friends travel to LaRousse, where they meet a boy named Tooi who is afraid of Pokemon due to an incident that happened four years earlier. Meanwhile, Deoxys, a Pokemon from space, has reappeared, putting a barrier around the city and kidnapping people. Rayquaza, a Pokemon that lives in the atmosphere, comes to fight it.