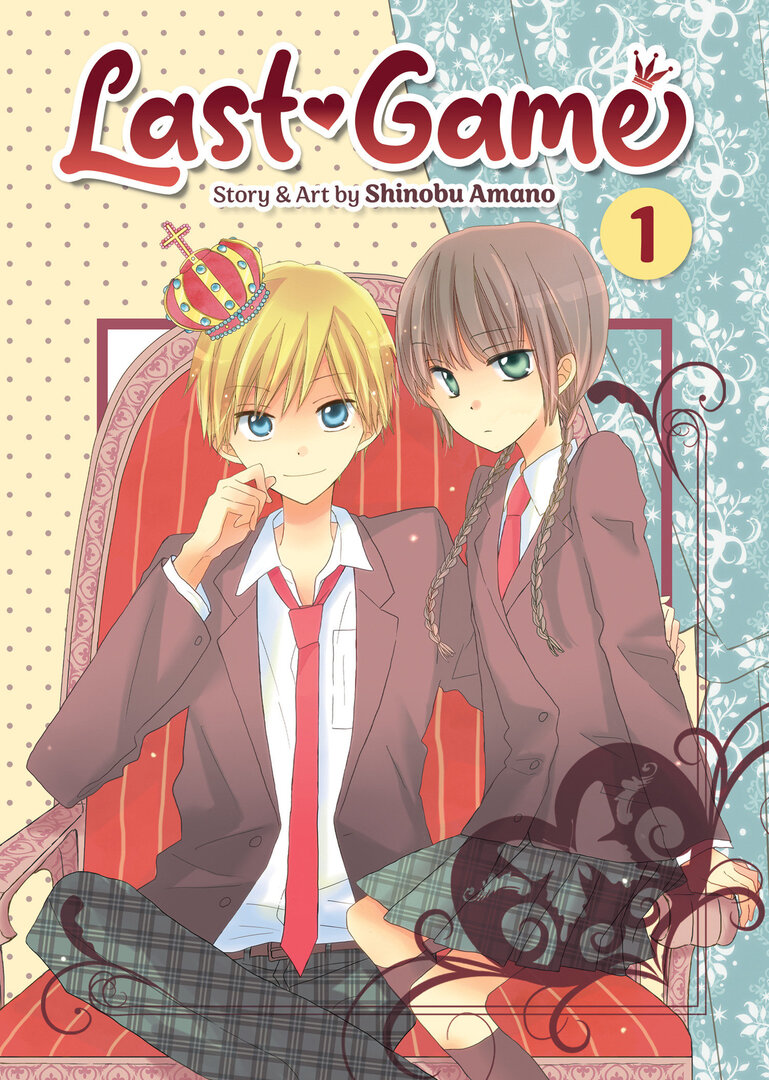 He's rich, he's smart, girls gather around him all the time, and he has always gotten first place on his exams... well, until Kujou transferred in his primary school class. She was quiet, plain, and poor, yet not once has she failed at beating Yanagi, both in academics and sports! Yanagi has made it his life goal to defeat this girl Kujou. Over the past ten years, Yanagi has followed her from elementary to middle school, from middle school to high school and even from high school to college to defeat her. Only when he decides to change the rules might he finally win! This is the story of their last game.

TL;DR – Typical. “Last Game” is a title which makes you expect an exciting, thrilling adventure where both characters constantly challenge themselves and each other. The description hints at something riveting, and even the subtitle “A twisted, pure love story” eggs on raw, cataclysmic emotions and their outcomes. But what you get instead is a typical, dripping, sickly-sweet, merry-go-round tsundere story dripping in middle-school-girl-fantasy-appeasement. It’s just disappointingly typical. *** HUGE SPOILERS FOLLOW *** Story – 4/10 There was supposed to be a game here! Some kind of challenge between the characters! But the first 3 chapters skip 10 years of time straight to University, and at that point, it’s already obvious that they both have feelings for each other. The only mention about some “game” is the main guy Yanagi grandiosely declaring it in Chapter 3. After that… sickly-sweet, dripping romance slathered in tsundere characters and insignificant “antagonists” that don’t make any kind of difference. There’s no challenge here: there’s absolutely no fear or worry about the main characters losing each other – they’re both so into each other that nobody else stands any chance whatsoever. After the 3rd chapter and grandiose declaration of war, it pretty much entirely disregards any facet of challenge or game and simply follows the smitten characters' thoughts. In the entire 24 chapters I’ve read currently, all of their problems and troubles arise from the two of them not being able to communicate their feelings properly. That in itself is a fine story concept, but it’s not what the title, description, and subtitle claim the story to be. Nothing definitive has happened in 24 chapters – just misunderstandings and lots of whiny, introspective main characters second-guessing their love interests when all they need to do is fucking ask. Artwork – 8/10 Not a 10/10, because there are way too many stars and sparkles in every scene. Yeah, these characters are feeling warm and fuzzy and lovey-dovey and shit. We get it. But artwork is pretty, otherwise. Good balance of black to white – I never feel like the images are overly busy or too empty. Characters – 5/10 The characters just lack so much depth. The main guy, Yanagi, is your typical shoujo manga dream-guy trope: ridiculously handsome, intelligent, athletic, and filthy rich *rolls eyes*. The main girl, Kujou, is also your typical shoujo manga mystery-girl trope: independent, a loner, also intelligent and athletic, but not overly attractive (unless magically given the right clothes and makeup?) and also poor (uh, where have I heard this before?). It’s fine to reuse concepts, but the issue is that there’s nothing different being done with them. It’s like I’m rereading every shoujo manga ever. The secondary and side characters, in particular, the “antagonists,” are insignificant and not even worth mentioning. There is absolutely no challenge or strife to the main characters, and about the only character development that exists is the two main characters learning how to properly express their feelings for each other. In particular, I’m not at all a fan of how, throughout the story, it is repeatedly mentioned that the main girl Kujou isn’t really all that attractive, and yet every opportunity to indirectly “show off” her appearance is taken. It’s also irritating that every other guy is attracted to the main girl, and every other girl is attracted to the main guy. Baaah Overall – 5.2/10 Just meh. I’m really, really disappointed. Don’t get me wrong – some moments in particular are very cute and very sweet. But it’s nothing but sweet. There’s no bitter. There’s no salty. No sour, hot, or cold. No challenge or game. Just typical.

Warning this Review May Contain Spoilers'Last Game' as a manga contains everything that I am weak for, a romance story in an adorable art style with likeable characters. Mikoto and Naoto are two 'rivals' ever since childhood, the manga is simply a continuation of their rivalry into university life with Naoto wanting to win this final game, to win Mikoto's love. STORYThis premise has been used quite a few times however only a few manga actually can accomplish a good high-quality story with such a basic premise. 'Last Game' has a well-executed story, limited pacing issues and a finale that should please anyone who reads this series. There were a few story arcs within the bigger story however primarily this manga focuses on the love triangle between Mikoto, Naoto and Kei which didn't bother me too much. I do say that there were a few characters I would have liked to have a bit more background to them rather than just club members. My only problem was the fact that it felt like I was reading a manga about high school students rather than university students due to the way the events played out, if you don't like the typical high school romance then you probably won't enjoy this series. ARTSimple yet sweet, it works. It's quite a basic style that encaptures the whole typical shoujo aspect and it works, it works well. It is neat and detailed enough to convey the story at hand. Not too much else to say other than that. CHARACTERSLikeable enough to get you invested in the story. Mikoto is so sweet, her relationship with every other character was enough, enough to keep the story moving and enough to give it a conclusion. I mean yes, the character designs are super basic but this is to be expected with this type of series. Naoto fits the whole opposite attracts theme between him and Mikoto, it's cute and sweet. Even the addition of the secondary and minor characters help the plotline of the story a lot and made the story as a whole more interesting. In conclusion, good manga and a perfect one to read casually in an evening. Similar to manga like 'Kaichou wa Maid-sama' and 'Special A'if you enjoyed them. -Yui This review was for SS 2018

This manga is about a boy who falls in love with a stoic and thick headed girl and his ten year journey of following her. Honestly this manga started off really awful for me because the site I read it on had it so poorly translated in the beginning I was worried I might drop it. But I trucked on and it definitely cleared up and was readable.  This story grew on me so hard I was trying to read it as quickly as possible. Not always a good thing since I miss bubbles for the decidingly less important people.  The main guy Yanagi is one of my favorite male protaganists I have come across in a long time. He's up there with Usui-kun from maid-sama. The way he loves the main girl and just does his best not to push her or ruin her trust is so heart warming and endearing I just love him. Not to mention when he actually gets this girl he's a wreck from happiness and its great. Literally this character is always sobbing XD in a funny comedic way and I love it XD.  The main girl is also fleshed out nicely but I'll always have a hard time believing someone could have that much of a hard time understanding their own feelings. But once she did she was the progression in the story and it was great.  I could reread this again, but it won't be anytime soon XD i'll probably buy this because it was just so cute. Definitely a great love story!