Lament of the Lamb - Reviews 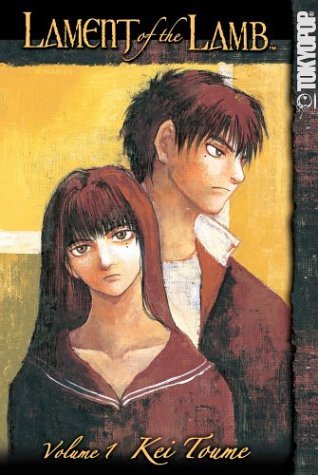 After watching the anime OVA version of Lament of the Lamb a good while ago, I looked a little into it and quickly found out it was actually an adaption of the manga. Since I loved the 1h45 show for its dark, gritty and gloomy way of storytelling, the manga was quickly marked as Want to Read. However, due to all sorts of things, I kept putting it off until now. How I regret not reading this sooner…

“Mingled among the Sheep

there is a Wolf—

And by his own lonely

fangs he is rent.”

The story follows Kazuna Takeshiro, a high-school student who finds out about a strange disease that runs through his family. Those infected get strong cravings for blood and suffer from attacks. As he finds out more about this strange illness, he soon finds himself in a situation he cannot turn back from.

The story manages to get across the feeling of guilt from lying to those close to you to keep them from harm, distancing yourself from loved ones to not drag them with you, and a scale of other emotions without feeling unnatural or forced at any given time. The story is free from any over-the-top drama, but is heart-wrenching all the same. While the manga is made by its character development, the story isn’t put on a backseat and keeps you hooked with plenty of cliffhangers and plot twists while keeping the pace consistent and calm.

This is a difficult one. As with all great, gripping stories out there, it wouldn’t be what it is if the art style was any different. Giving it an unbiased look however, the art in Lament of the Lamb is far from spectacular. The backgrounds are simplistic and often non-existent. Character designs are fitting and accommodate the personalities well, but are aside from some added accents fairly simplistic. Some scenes, especially those involving heavy emotions like despair, look a bit like sketches, which, along with the simplistic, “colorless” look this manga has, adds to the dark and gritty feeling. Long story short: Yes, the way it is drawn adds a lot to the atmosphere, but that doesn’t change the fact that the art is pretty bland. I wouldn’t want it any other way, but I can’t expect everyone to feel that way.

This is what the manga is all about, character development. They completely succeeded in making all the main characters and even the side-cast feel natural and believable. The entire seven volumes are spend fleshing out the pasts of the characters, why they’ve become what they are now and why they act the way they do. Kazuna was the perfect person for the lead role. He’s pretty much a regular high-school student (although they did a great job giving everyone a natural, yet completely unique personality, so “regular” might be a little misleading) having to take on incredible burdens, giving you a relatable look into a situation no one would ever want to be in. Chizuna on the other hand gives the impression of being someone very difficult to grasp at first, but as the story goes on and more is found out about her, it only seems only natural why she’s become the person she is.

Lament of the Lamb is a dark atmospheric, and yet relatable and not overly-dramatic character-driven story. Yes, it left an impression on me. I’ve only read a relatively small amount of manga so far, but if I were to give it a spot on my anime toplist, it would be placed in the top 10 (although keep in mind that atmosphere is a huge factor in my personal ratings). Unlike in so many other drama’s, the thoughts “why the hell are / aren’t you doing this or that” don’t surface here, since pretty much all the actions the characters take seem completely understandable and logical, even if it means digging their own graves. It’s a gripping story from start to finish. The only reason not to pick up this title right now is if you greatly prefer stories with action or ecchi over character-driven ones. For fans of dark character-driven stories like me however, this one is a feast.

A really fascinating series about dysfunctional families, abusive relationships, codependency, and most centrally, needing other people and how we replace those people when they leave us, healthily or... otherwise, as this manga tends to focus on. It's all surrounded by the main characters' vampirism, which works in tandem with the main themes rather than being entirely a metaphor.

Artwise, it feels a bit old-fashioned and occasionally sloppy, but never outright bad. There are a few points where the art really shines - the characters' emotional states, and the characters and their interactions are 99% of why you should be reading this anyways.

The ending was pretty disappointing imo and didn't live up to what I was expecting, but still a wonderful read if you love stories about broken people desperately trying to glue themselves back together. I might actually recommend it to fans of Haibane Renmei and the like since it's essentially a much much darker take on the concept of "semi-supernatural creatures and their messed up relationship dynamics." If Haibane was too light in the beginning for your tastes this might be right up your alley.

One final note: Incest. No sex, just kissing and vampire bullshit, but if that squicks you out run. Run very far away, cause if the first volume seems like it's just hinting at it and it won't come to anything... that's not the case. As for me, bring it on!

Originally posted on the forums on April 5th 2009

I've just finished reading the last volume of Hitsuji no Uta, and while I much preferred the ending Kei Toume picked for the manga (compare to the OVA), I still have mixed feeling about it overall.

Maybe it's just me who can't handle so much self-affliction, or maybe it's because it was too much of a "totally dark and desperate story, an one-way trip towards destruction" (those are Toume's words from the epilogue). At times, it felt like it was just... too much.

Story-wise, it was great, but imo some characters made it less credible than it should have been (I still don't get why Kazami was even introduced, and I just don't buy most of Kazuna's choices).

Overall I'd give it a 7.5 / 10, mostly for its originality. We've already seen that kind of plot, but it was never developed in such a way.