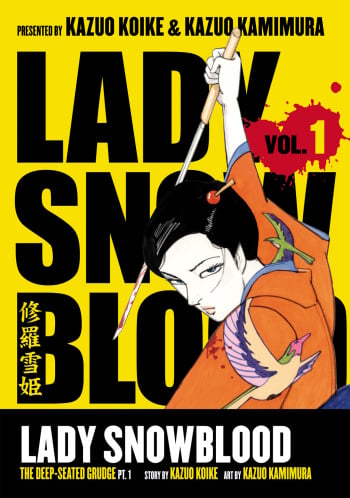 The kingdom of Juushin is suffering at the hands of a cruel emperor. In order to stop his father's rule of tyranny, the crown prince will enlist the aid of a legendary assassin with reasons of her own for wanting the emperor dead. One ruler, one schemer, and... one assassin.

Both Females are assassins with one keen goal in mind. They are both amazingly skilled and smart through the manga. The art of manga in "In Full Bloom" is different to Lady Snowblood (that is a traditional 1970s style manga) because its digital effect as well as the manga being made recently.

Mysterious assassin Mayo, a Japanese man in Malaysia, will kill anyone you want for just five dollars. Of course, he'll kill you for five dollars too, but doesn't that just even the score? With outcast allies at his side and formidable enemies against him, Mayo is the only one who can stop a conspiracy that stretches around the world!

Freesia is set in an alternative Japanese society that is at war, and has passed a law legalizing retaliatory killings. If somebody kills your loved one, you are legally sanctioned to kill, or hire someone to kill, the victimizer. The manga is set around a character who works for a firm that specializes in these retaliatory killings.

A port town where the Mafia actively operates behind the scenes. Gohongi is a young man who has come back to this to place where he was born after many years and finds a job working at a video rental store, which also becomes his new home. It is here that he begins to live with a young girl named Mei and a homosexual by the name of Katsura. But both of them are members of the Mafia group, Lovely Town, and fifteen-year-old-Mei is a ruthless hitman.There have been rumors that the struggles between Mafia factions are becoming more intense, and still not able to completely grasp the situation, Gohongi winds up getting dragged into a world of trouble...

Possessing both flexibility and tenacity, Imomushi is an assassin that does not kill anyone but those who are assigned to her. She seems to have had something happen between her and her older sister in the past, however. A new spin-off story from the same author of Arachnid, this story looks at the inner workings of a top assassin within The Organization itself.

Tatsuo, Hide, Satoshi and Aya worked together to cheat people out of money. They tended to target marriage services, where they conned money out of people looking for love. They were good at it, until they crossed the wrong guy. Then they saw the world below the surface of dupes to cheat, when the 'collection agency' came for them with extreme violence. A wild-eyed maniac who seems to get off on the torture takes Satoshi and Hide, and then Aya and Tatsuo. There may be hope for Tatsuo, though, because the man recognizes him. The torturer is "Akasada" a bullied kid that Tatsuo knew from school. Now Tatsuo and Aya have been pulled into Aka's world.

Munsu is an Angyo Onshi - an arbiter for the country of Jushin. Fighting evil is all he knows, but since Jushin has recently collapsed, what is he fighting for? Wandering from place to place, Munsu finds himself battling those who would further destabilize the country, whether they be arms dealers, smugglers, tyrants, or necromancers. Accompanied by a female warrior named Chun Hyang and able to call upon the strength of a ghostly legion with his Angyo Onshi powers, Munsu sets out to help those who are willing to take a step towards helping themselves, and bring justice against all that is evil in the world.

The Voices That Call Me

Kaoru is an ex-manga artist who for the past fifteen years has shut himself away in his darkened room. However on one hot summer night, the recluse hears voices calling to him and he decides to leave the house for the first time in over a decade...