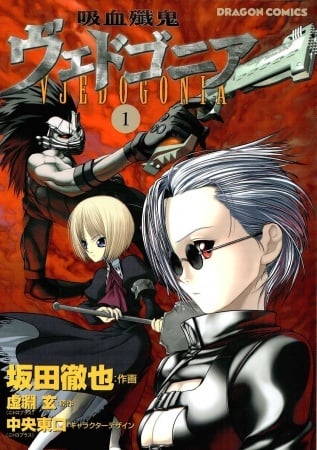 Leon is a pure blood vampire, able to suppress his instinctual desire for blood and live amongst humans due to his deterrent, Noah. Bearing a seal that complements Leon's, Noah holds Leon's power in check. However, Noah's own powers are oddly unstable. This is their story.

I don't quite get that they call me by tactless name, "vampir." She is all that I desire. Louis, a vampir boy lived with the Kamuro family as a "brother-in-law" in a home of human being. He had hoped it would last forever, however, peaceful and pleasant days with his beloved sister, Harumu, suddenly collapse with an appearance of another vampir, Noah.

Nicol Strach descends on a research lab, sent by a special organization working for the Vatican. On his way to find his target, he runs across a young girl named Kagura, the sole survivor of the vampire attack that claimed the lives of all of the local researchers. Together, they try their best to escape in a blaze of gunfire – but just who is Kagura, and what is Nicol's true mission?

Boku no Noroi no Kyuuketsukihime

Yee-haw! It's vampires in the Old West! It's 1870 in the Old West, and a group of zealots called the Anti-Vampire Mission - working under the banners of God and the president - wage war against the carriers of the "mad blood disease." It is a war that knows no bounds of decency. In this miserable, lawless district, a girl named Kyrie stands up to fight. Her father is the infamous "man in black," a vampire of great power that has been captured by the Anti-Vampire Mission. Kyrie also suffers from the mad blood disease, and she is pursuing her father - with the intention of killing him!

All sorts of odd things begin to happen when Mahito, a young high school girl, survives being rundown by a car traveling at high-speed. What lurks behind the world of the living? What is it that hides just out of sight of human perception? There is more to our world than our eyes reveal, as Mahito is about to find out. Modern-day vampires, the occult and hunters of the undead... 'nuff said!

On the corner of Chinatown, the two of them crossed. The boy name is Inumi Haserou, high-school bodyguard who takes 1000 yen for each trouble; the girl name is Nata, self-styled Sage who mysteriously collapsed in the back alley. Deciding to protect Nata, Haserou would have to face the sudden change in his daily peaceful lives, as a group of Vampiric being who consumed people Ki, called [Demonic Sage] starts to attack them. Their purpose: to hunt Nata, who holds the key as the powerful weapons capable of turning them powerless!

Apprentice Friar Killy became a Kresnik (vampire hunter) in training. Is this the beginning of a great journey he must take?