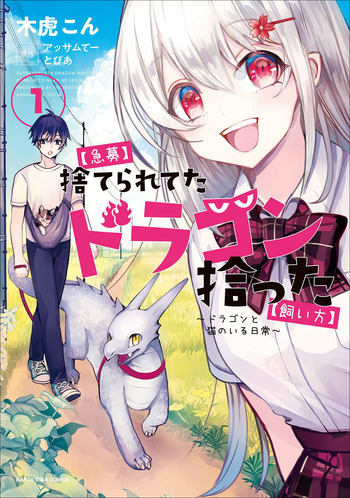 "Daddy!" The dragon blinked as the wee little human called out to him. Him? Her "Daddy"? Powerful enough to have been venerated by humankind, yet warmhearted and even a tad ditzy, the dragon soon finds himself raising and doting on the precocious Olivia as if she really were his daughter in this touching tale. The toddler may be impossibly cute now, but just you wait—she’s a curious child and she’s growing up real fast. You can bet that one day, she’ll be the strongest human there is! But first, how will he handle little Olivia receiving an acceptance letter to a human school?

"Listen well! I――I will cultivate a farm!" The Dark Dragon King, one of the Great Six Dragon Kings, aims for a 'slow life' in the newly rising peaceful world. A heart-filled slice of life story with an arrogant yet humorous Dragon King and his neighbor who gets forcefully involved with him.

Working under a certain feudal lord, Haru is very ordinary and lives a normal life. However, the jewel in the ring her late mother had left her can only be found in the dragon country - it’s an extremely rare thing. After finding that out, her life completely changes. She picked up a baby dragon, and a mysterious man wearing black clothes appeared after. What will happen to Haru’s ordinary life?!

The guy who served as an assistant for an adventurer party, ■■■■■, was betrayed by his party members on the dragon-infested Mt. Kuguse. Mortally wounded, he wakes up later in the nest of the Red Dragon, Kafal, who lost its eggs in the disaster. He has become a girl called Lushela, having been bestowed the name of the dragon's dead daughter, after losing both his memories and his name. It seems like Kafal's started to raise him as its own daughter...? A unique parent-child tale of how one dragon and one human's strange fates bring them together.

Melissa is a young woman training to be an attendant in the royal castle, working alongside the heroic dragon knights and their magnificent dragon steeds. The dragons love Melissa, and she’s soon selected to join Hubert–former captain of the dragon knights and newly appointed earl–in the borderlands, where wild dragons roam freely in the skies. Might romance blossom between Melissa and this handsome young lord, whose new position brings with it a whole host of dilemmas?

Raiki, a high school student, transforms into a dragon because he was born with the 'Beast Code DNA' that laid dormant within him and generations of other people for centuries. Raiki now struggles with his new abilities and clashes with others who also possess the Beast Code DNA but plan to use their powers for wrongdoing. Conversely, Raiki's girlfriend Tomoko possesses DNA that instinctively compels her to battle against anyone who has the Beast Code DNA. What is the fate of this couple who are now forced to fight to the death because of their genetic code?

Deep in the forest where ferocious beasts and magical creatures dwell, a cat takes in an orphaned baby dragon as one of her own.