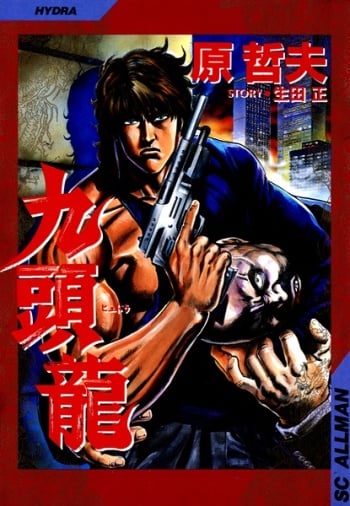 It looks like your normal everyday cafe with sweet treats and nice employees. But appearances are deceptive. Behind the facade hides an up-and-coming gang whose goal will paint the city red with blood. A gang that mercilessly exterminates other gangs.

One day, a yakuza gang member is attacked in Roppongi, Tokyo. This is only a prologue to one man's revenge story, triggered by the events of twenty-two years ago. The flames of revenge burn in the darkness of the city...

As Japan's population grows older and smaller, and murder rates sky rocket, the Japanese government began to implement stricter laws against the worst criminals. With even the death penalty lacking the deterring force to stop the most violent criminals, Japan brought back to life a law from the 19th century: the "Revenge" law. This law will now allow victims and their related parties to employ a government special forces agency to capture the murderer and reenact the exact same methods with which the victim died onto the murderer. Yamagishi Yuji is the 7th member of the Special Forces "Sukedachi-nin." Each of the members of this special forces have been chosen to enforce the Revenge law because they too have been a victim of past crimes.

Set in a certain city, a would-be gangster wanting to be recognized takes on a dangerous offer, to kill a boss of a Yakuza.

The world is split into two kinds of people: those on the "inside" of EDEN, and those on the "outside". Within EDEN there is clean air and water - it lived up to it's name of a true paradise. But EDEN cannot contain all of the people of the world. EDEN actually made conditions worse for those outside. Because of this, many resistance groups have been formed. Ricalna Forde is a soldier of the resistance team COSMOS, whose mission is to infiltrate EDEN's main headquarters and destroy the "Central CPU" - that controls all of EDEN.

Second season of City of Darkness.

Everyone in his Yakuza gang looked up to him. He was the boss's favorite pupil, but then in a single night, after he had won so many territorial fights for his gang, he lost everything! Why?