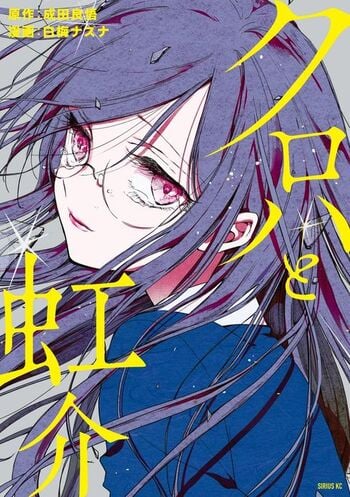 Hey, welcome to this humble review!

So, I just read this manga. It's 9 a.m., I'm so sick that I'm almost dead and I'm finishing up the last chapter of Dead Mount Death Play, of the same author of this manga. I finish up the last chapter and I look at recommended for Dead Mount Death Play. And this manga, Kuroha to Nijisuke, pops up. The cover looks good, so I decided to look into it. It's only a few chapters long, which is great, because that means it will be a quick read. And I start reading it. I had good luck.

The story is about a girl that randomly, has good luck. Like, REALLY GOOD LUCK. Hell, she plays Russian Roulette and then shoots herself 6 times (because the gun had a chamber of 6 bullets) and she, guess what? survived. DAMN LUCKY GIRL. Oh, and did I forget to mention that the girl is a cutie, perfect to be my waifu? Anyways, having good luck doesn't mean she is actually lucky. Quite confusing, right? Let me explain myself. For example, her family won the lottery due to her good luck, but then, her relatives killed her parents because they were jealous of their good luck. Kinda fucked up, I know. Now, she is under the care of a mafia boss (that to me, he just looks like a damn pedophile) that uses her for her good luck. And then, the girl just tries to escape the guy. And meets this other guy.

This "other" guy is a dude with such bad luck that the bill that you still gotta to pay after 10 months will look like nothing. So, to the main point. This guy meets the girl and they both fall in love and bullshit romance (that is actually sweet), etc... And both again try to flee the mafia boss. And that's pretty much it.

In the end, there's an extra chapter that makes everything super sweet, because SPOILER AHEAD, BUT IT ISN'T REALLY THAT MUCH IMPORTANT SINCE IT'S JUST AN EXTRA BUT MAKES EVERYTHING MUCH MORE SWEET both of them are literally, like, LITERALLY their other half. I mean, the boy should have been reincarnated into the girl, but he didn't so... THEY ARE TOGETHER, COMPLETE! SWEET!

The art was pretty good. Not my style though. Still, it was good. IT IS GOOD, OKAY!

I don't have much to say besides that.

Yoitsuji Kuroha: She is the girl. Good luck, a damn cutie (totally not my waifu, of course, yeah, sure) and in love with the guy. She blames her for her good luck, since her good luck only affects her, and brings misfortune to others.

Murokawa Nijisuke: The guy. Bad luck, strong as hell and in love with the girl. He doesn't believe in luck (though he has been hit by Truck-san many times) and he is an idiot lol.

There are other minor characters, like the mafia boss, that is a bastard.

So that would be it. Thanks for reading until this point, I guess?
Comment down below To Be or Not To Be if you have read until here! And maybe drop a like. Maybe?