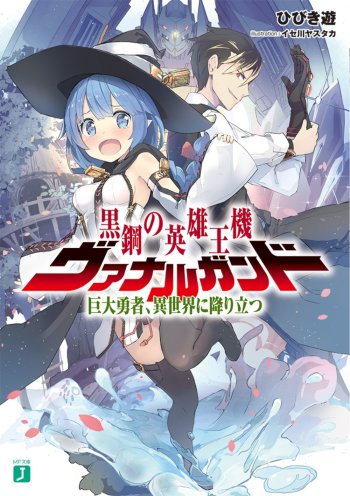 If you're looking for manga similar to Kurogane no Eiyuuou-ki Vanargand: Kyodai Yuusha, Isekai ni Oritatsu (Light Novel), you might like these titles.

Tsurugi Eisuke is just an ordinary highschooler, barring the fact that he had an arm strength far exceeding normal people—. One day, while hunting for thugs out of boredom, he heard a voice in his head. ‘I need your strength…! Please… come here… to our world…!’ And before he realized—the scenery of another world spread before his eyes! As he marvelled at the unfamiliar view, the girl who summoned him came to him with a request. [Please defeat the “reincarnated cheat heroes” who dominated the world after defeating the demon king.] Bored of lacking opponent who can fight him on equal grounds, Eisuke readily accepted the request at the chance of fighting those heroes. “I shall trample all those pretentious heroes!” This is the heroic fantasy of the strongest high schooler facing off against the reincarnated cheat heros!

Unexpectedly summoned to the world of Aletia from modern-day Japan, Hiro Oguro soon discovers this isn’t his first visit. As the legendary Hero King Mars, he once ruled battlefields, conquered nations, and founded the continent-spanning Grantzian Empire before giving up all memories of his hard-won glory to return home to his old life. Now he’s back, a thousand years after he left, and his legacy is in peril. The Grantzian Empire creaks under a warmonger’s rule while ambitious royals squabble for power and foreign nations sharpen their swords. After a chance encounter with Princess Elizabeth von Grantz draws him into a cutthroat struggle for imperial succession, Hiro must don the mantle of the War God once more. Can he live up to his own legend now that Aletia needs him again?

As he was being transferred to a different world with his classmates, Fubuki Amasaka was pushed out of the teleportation circle by his class bully, Yushin. When he woke up, he was alone and deep in a forest.However God, who had saw the entire thing and already warned them to stay in the circle, took Yushi's cheat skill away and gave it to Fubuki as punishment. Can Fubuki, who got two divine blessings, live in a different world safely?