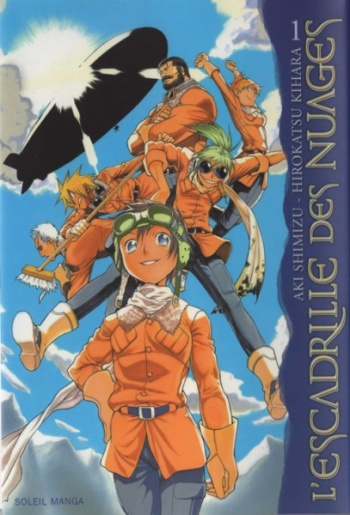 Having lost her mother at birth, Jane Buxton grows up with her brother George the dreamer and her moody step-brother William. George sets off to seek a legendary 'floating liquid' that he hopes can revolutionize transportation and bring about human flight, but word soon returns of his tragic death. Convinced that her brother is still alive, Jane courageously sets off to find him, and encounters a world of adventure.

Imagine a world where coal is the only fuel source and steam technology is highly advanced; in this world lies a fog-covered city known as Steam City. And under the cover of the mist, evil people use megamatons – steam-powered robots – to wreak havoc on the townspeople. Narutaki, a teenage detective with a brilliant mind, is the only person who can put a stop to these villains. With the aid of the nurse Ling Ling and the megamaton Goriki, Narutaki will stop at nothing to guarantee the safety of Steam City and all of its inhabitants!

In Amberground, the land of eternal twilight, Letter Bees and their dingos – creatures trained to protect them – deliver mail to the general populace. However, unlike normal mail carriers, their job is perilous as they must traverse the country while fighting off the giant armored insects known as Gaichuu. One day, a Letter Bee named Gauche collects his latest delivery: a young boy named Lag Seeing, whose mother was taken under mysterious circumstances to the capital of Akatsuki. As the pair travels together, they strike up a friendship, but when they finally reach their destination Lag and Gauche part ways. Now, several years later, Lag is about to take the exam to become a Letter Bee himself so that he can meet with Gauche again and find out what really happened to his mother all those years ago. But before any of that, he must find himself a dingo...

Years ago, humanity abandoned the ruined Blue World. Generations later, with the planet again capable of sustaining life, mankind returned. In the skies above the reborn world, rebellious young Fam and her best friend Giselle make their living as Sky Pirates. Atop sleek Vespa Vanships, the girls dart fearlessly through the clouds, capturing and selling airborne battleships for profit. It’s a life of care-free swashbuckling – until the Ades Federation attacks. The only nation to remain on Blue World during humanity’s exile, The Ades Federation wages war against those who returned only after the planet’s darkest days had passed. When Fam and Giselle rescue a princess from the clutches of the rampaging Ades armada, they join the young royal’s battle to save her Kingdom from destruction – and undertake the impossible mission of uniting humanity in peace.

“He” has kept moving forward through his life. Nothing else bothered him. But, one day by chance he realized that he has definitely grown old. And eventually, he makes a full stop.

The Sky Pirate Fam and Millia (the princess who Fam rescued as her Turan Kingdom faced devastation) wage a battle against the Ades Federation that reduced Turan to ashes, and aim to establish a revived Turan Kingdom.

In an age where devices are powered by steam, technology that fuses bodies to machinery makes cyber-boxing fights immensely popular. A young man named Levius is drawn into these fights through what can only be destiny, but his talents will be what determine his future.