Alt title: Due to a Mishap, I Gave the King a Love Potion to Drink and I Became Queen (Light Novel) 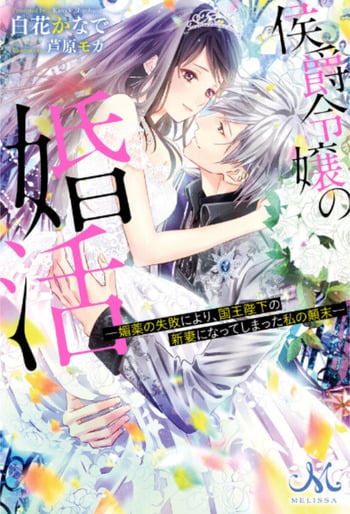 Japanese in her previous life, Lidi is a duke’s daughter in this life. Her fiancé is the Crown Prince, Freed, who is known for being flawless. “No matter how beautiful he is, I absolutely don’t want to marry a polygynous royal!” Troubled, Lidi came up with an outrageous plan for the sake of breaking off the engagement!

The kingdom of Heileland had a long and proud history. However, during the night of the Star Festival celebrating the birth of the kingdom, Queen Alicia was stabbed through the chest as a rebel army stormed the castle. Her beloved king had abandoned the people and fled with his favorite mistress. Alicia should have died in the depths of despair, reviled as the “Courtesan’s Poisonous Rose”, but for some reason, she was given a second chance at her life. On her 10th birthday, she suddenly regained memories of the night of the uprising. In her redo-life, Princess Alicia began to ascertain what happened through the chaos. In a strange twist of fate, Alicia ran into the bishounen who had killed her in her previous life: Clovis.

World domination: our long-cherished aspiration! Naturally, the most appropriate person to aspire to such a surreal ideal is the Supreme Ruler of Evil! Mia Oonari’s father, the former Supreme Ruler of Evil, died leaving his only child with their organization’s sole ambition: world domination! Mia sets about enacting her own innocent ideal of taking over the world only to be hindered by the five Champions of Justice who make up the Crow Rangers!

Catriona Julie Grande, the daughter of a marquis, was the Crown Prince’s fiancee. She was executed under false charges but went back in time. All she wanted was to live her life peacefully and prevent the same tragic fate from occurring again. But one day, the Prince appears in her life again and everything begins to fall apart. She has no idea what to do.