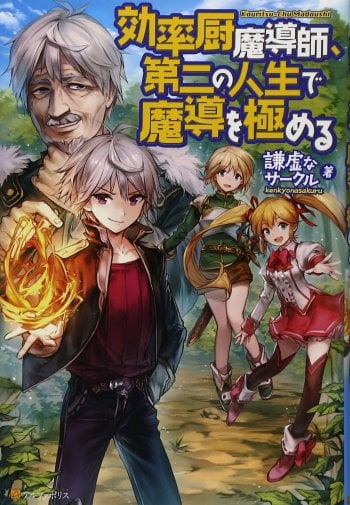 If you're looking for manga similar to Kouritsu Kuriya Madoushi, Daini no Jinsei de Madou wo Kiwameru (Light Novel), you might like these titles.

Lud was known as the strongest tank in history, and he served in the Hero’s party as a tank carrying an enormous shield. However, when the Hero, Kiglas became irritated from being unable to progress through the dungeon as he hoped, he disparaged Lud as a burden with only stamina and chased him out of the party. Thinking of returning to his village to meet his beloved sister, Lud was travelling when he came across a girl who was being chased by a monster and saved her. The girl held the rare “Appraisal” skill, and when he requested for her to appraise him, the skill which he thought was useless so far was actually an incredibly powerful skill. With his great stamina and that skill, Lud brandish his power as the strongest tank—.

A magician who lived for hundreds of years by posessing the bodies of others was strolling through the forest in search of a new vessel when he found a young man on the verge of dying and surrounded by slain monsters. Under the condition that the magician would protect Erena, the boy's companion, he made a deal that they would coexist together in the one body. However, what the magician did not know was that the boy was the swordsman that had been expelled from the hero's party.

Adventurer Lughys spent his days as a loser. Oppressed by his party members, so called "comrades", the road to being a hero or a legend was a long ways away. Then suddenly, a mysterious shadow called out for him, giving him the chance to return to his past, and told him he'd be given only one chance. This time, he'd obtain valor and honor, and love! However, the god of fate would not permit it. Unbeknownst to him, his dream takes a 180...

Reiji Saeki, who lives in the north eastern countryside town, lost his life in an accident during summer vacation. ……But before he knew it, a mysterious ball of light hovered in front of his eyes in a world of whiteness. That ball of light was a magician from a parallel world, and is looking for a person qualified to inherit the magic they had created to prevent it from being lost. Reiji, who rode on that suggestion, now lives in the parallel world Elgin, with a new body and powerful magical power.

One fateful day, a girl time slipped into the Sengoku Era. It was an abrupt enough event to be dubbed god’s whim, done to sate hellish boredom. The girl has no power to change the world. She was a very ordinary, common, and plain girl that can be found anywhere. And that girl can do no more than a single thing. Survive the Sengoku Era ——– that’s all.

Carol is an E-rank Healer. Even among adventurers, an E-rank means you're the absolute weakest. Even though she was told that she'd be useless, she still poured her heart and soul into being the best healer for her party. In the end, she was thrown out of the party with no money and no way to get back home. On her way home, Carol comes across a dying adventurer, Kaido. She treats him with the medicine which she had created, and for some reason, she receives extremely high praise for it?!