Alt title: I Decided to Be a Mute So That I Can Escape My Engagement!! 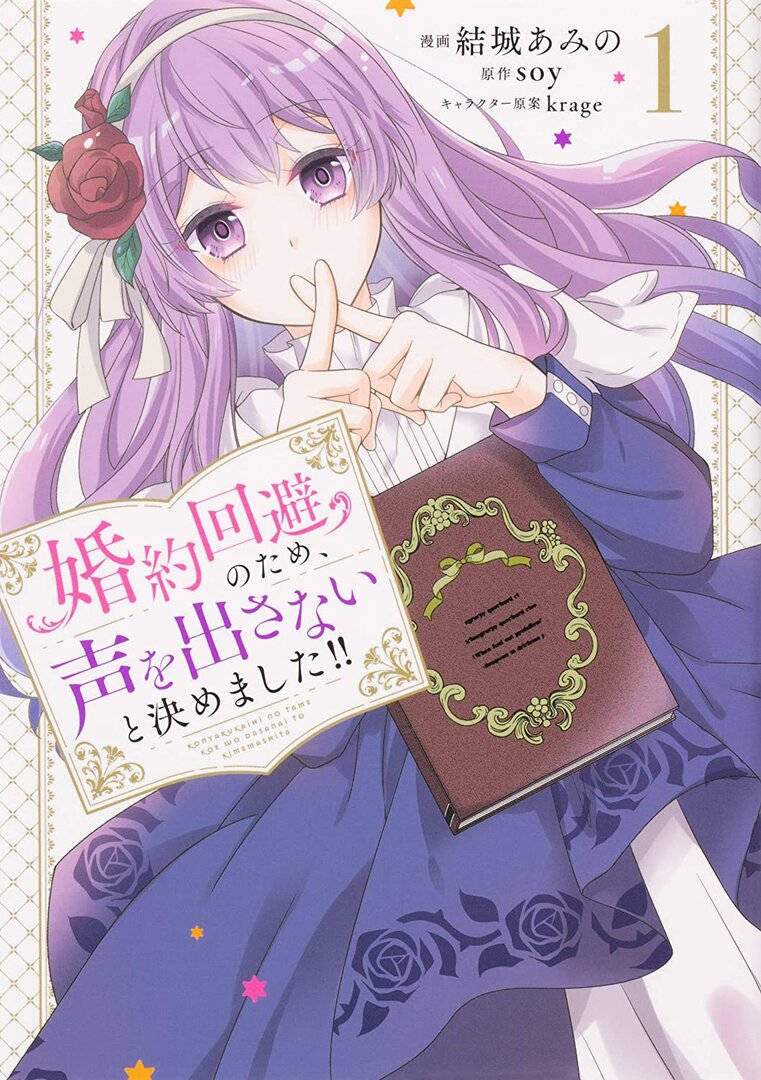 If you're looking for manga similar to Konyaku Kaihi no Tame, Koe wo Dasanai to Kimemashita!!, you might like these titles.

The new series will continue to follow the lives of Iku and Dōjō, as well as Tezuka, Shibasaki, Komaki, Marie, and others.

Iku Kasahara has dreamed of joining the Library Forces ever since one of its soldiers stepped in to protect her favorite book from being confiscated in a bookstore when she was younger. But now that she's finally a recruit, she's finding her dream job to be a bit of a nightmare. Especially since her hard-hearted drill instructor seems to have it in for her!

Asami is a girl who adores reading books in an old library in her hometown, almost as much as the person who works there. That person is the librarian Mizushima-Sensei, who is quite unusual, but also very popular because of his young age. When someone begins to write graffiti in the books Asami loves most, it seems there’s trouble within the small library. Can their love of books and the dream of a wonderful library bring these two characters closer together?

Earl Bernstein's daughter Emilia is said to be so beautiful that she can captivate men with a single glance. Many have come to seek her hand in marriage, however, she has refused all of them. In truth, she'd rather invest her time in archery and horse-riding than bridal training and sewing. One day, she meets another noble who discovers her true nature. For vague circumstances he doesn't even bother explaining before he proposes (just that his wife died three months ago), she accepts his offer to be temporarily married for a year.

"I'm a wicked woman?!" Sadie, the former count's daughter, unknowingly had made a bad reputation to herself as a wicked woman during the time when her original body was in the possession of someone else for the past 10 years. Suddenly, she returned to her original body in the middle of the abandonment of her engagement with the knight captain Rufus. She told them that it wasn't her and her body was just being stolen by someone, but they wouldn't buy it. Sadie, who has given up telling them, begins to search for the criminal who robbed her body. On the other hand, Rufus is confused by the sudden changes in Sadie's personality. This is a love fantasy story about two people who keep crossing paths with each other and gradually become closer.

Margaret, the daughter of the Duke, whose engagement was abandoned by the prince because she was not able to exert her power in the ritual of the saint. Instead, there are rumors that his sister-in-law is a saint, but Margaret-has hidden the secret power of talking to a fairy. This will free you from the unpleasant prince and sister-in-law!

The Fiancée Chosen by the Ring

At fancy dinner parties, embroidery-loving noblewoman Aurora is usually busy admiring the gowns than trying to win the affections of men—but at one party, her peace is shattered by a mysterious ring.

The poor daughter of the Marquis, Teresse, who has been striving to save money day and night, was suddenly informed that she will be one of the “Prince’s Consort Candidate”. The generous rewards are every candidate will be granted 100,000 peir and employment as a court lady or lady attendant. With this in mind, she decided to head to the palace as a “Prince’s Consort Candidate”. However, what awaits her in the palace is a war with self-indulgent young ladies and other consort candidates! Will Teresse be appointed as a court lady or will she stand out from the rest as the Prince’s Consort!?

The daughter of the Earl, Rosa, was known for her beauty and compassion. But in reality, she was a rotten lady who pursued her ‘moe’ by making delusions of ‘rose love’, the romance between men. Her dream was to become a nun and write down a ‘bible’, spreading the rose love throughout the continent. As the preparation of entering the priesthood, she donated to the monastery (as a bribe), strived to improve literacy (to prepare for her missionary work), and made humus for her territory (as the symbol of rottenness). One day, she met her half-brother, Bernard, a fourteen years old boy. Concluding that Bernard was the ideal ‘uke’, a talented person that only appeared once every a thousand years, Rose devoted herself to ‘Bell-tan’s Harem Plan’. However, her rotten behavior was mistaken for noble deeds. The princes, princesses, and even the foreign princes started to get involved, and she began to spread her influence all over the country…?

Yugao's grandfather privately owned library stands on a precipice. In this library there is a special room which filled with occult-related books. It is rumored that the room is cursed. Kiryu, a serious man, works alone in this mysterious room. He is crazy about giving lessons to people. Yugao is very fond of him, so she one day she kissed him and he becomes a different person in his attitudes about sex.