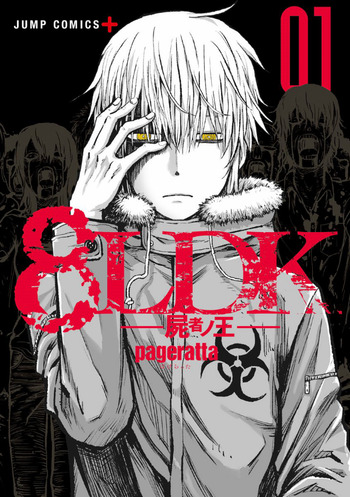 If you're looking for manga similar to KoLD8: King of the Living Dead, you might like these titles.

When the zombie apocalypse came to Japan, Satou Masaru thought he was a goner for sure…until two super hot girls came to his rescue! But Satou’s relief is short-lived once he realizes just how insane his saviors are: Karin is a happy-go-lucky psycho, while Miki is a megalomaniac with plans to create an undead army and rule the world! Can Satou survive being their underling, or will he take his chances with the zombies?!

If you liked this, you will definitely like this! Both follow the High school students suriving in the zombie apocaylpse but both groups plan to use the zombies for their own means!

A pregnant woman is pursued by a supernatural creature. On the internet, videos of a bandaged hero surface. 15-year-old Tim Muley makes a terrible discovery in his neighbor's garden. Three seemingly unrelated events, all of which seem to point to an imminent zombie apocalypse! But this time the story's not about the end of mankind; it's about a new beginning...

Both stories are about the start of the zombie apocalypse, but they are special since protagonist also becomes zombie. They are also similar in the aspect of protagonist trying to save the world.

A black comedy about a father and son who move into a new town where everything is just plain weird as they struggle to find work and get about their daily lives.

The Walking Cat: A Cat's-Eye-View of the Zombie Apocalypse

Civilization is dead. Zombies roam the earth. When Jin, a young man trying to survive the chaos of this new reality, rescues a cat from certain death, the pair sets off on a quest to find Jin’s wife, who may yet be alive.

Benny Imura and his friends must navigate a post-apocalyptic zombie-infected America in which teenagers are forced to find labor or face starvation. When Benny grudgingly joins his annoying older brother Tom as an apprentice zombie hunter, he soon discovers that almost everything he believed about his sheltered life is wrong--and zombies aren’t the greatest thing to fear in the Rot & Ruin.

In less than an instant the world as we knew it was at its end. That’s right. The Apocalypse. In a single blink Zombies appeared and mutated monsters began to rampage all throughout the world. Now it was the human species turn to fight for survival and planetary dominance! On the same day that the world descends into chaos we meet Yue Zhong. Initially only hoping to get to his friends and escape to a refugee camp our protagonist sets out, inadvertently building a team along the way. After a series of fortuitous events and a few serious hunches our hero decides it’s time to do more than just survive! Yue Zhong begins to form the foundations of an enormous survival plan… before he suddenly discovers that he has only gotten over the first hurdle…