Koko wo Isekai to Suru! - Recommendations 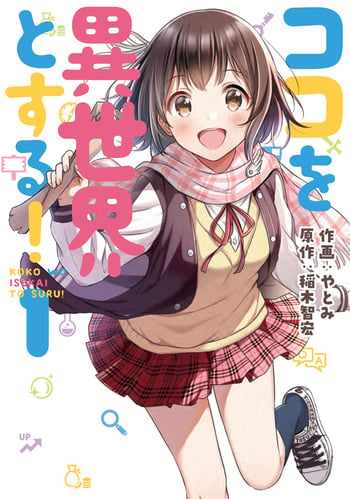 If you're looking for manga similar to Koko wo Isekai to Suru!, you might like these titles.

Enoku Daigoro, Tokoro Chacha, and Kiyose Kai were in film-making club together in middle school. Now that they're going to high school together, they're determined to start up a new film-making club for their high school years! On their first day, they learn about another new student, Kotohiki Sakura, a cute girl who is constantly surrounded by crowds of adoring guys. Enoku has more interest in films than girls, but he thinks she and her popularity could be a great addition to the club.However, when he sees her for the first time, he notices that she has a halo and angel wings! No one else seems to see these things, and his comments about her appearance are taken as a love confession. Enoku and his friends are determined to invite Sakura, and maybe her gatekeeping friend, Yachiyo, to join the club they're about to found and make films together!

Three girls join a swim club at a school that has no pool.

The Heavy Metal Music Group at the high school consists of just Amanokawa Rinko and the main character, a teenage boy madly in love with her. The club is intended for people who enjoy the music genre to discuss their passion for heavy metal. However, there's only one kind of passion going on in this club house located in the outskirts of campus, and it is definitely rockin'.