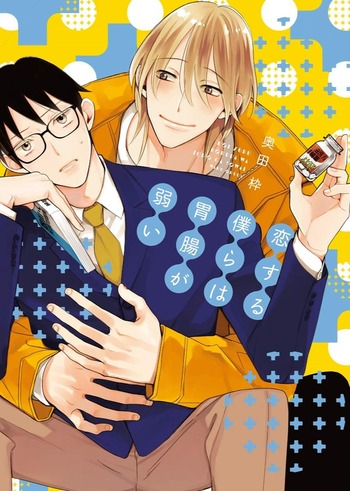 If you're looking for manga similar to Koisuru Bokura wa Ichou ga Yowai, you might like these titles.

The high school lives of the gregarious Shuu and the antisocial Kazuki.

Miyamoto and his childhood friend, Matsunaga, have a physical relationship since way back. However, just when Miyamoto tries to sort out his feelings, Matsunaga discloses a shocking revelation– he has done it with women before! This pushes Miyamoto to accept Eto's persistent pursuit. However, to Miyamoto's surprise, his body reacts to Eto's touch even though his heart belongs to Matsunaga. And then, Matsunaga discovers them...!!

Katoma doesn't like going home, so he always hangs out in the same place with his game boy, until he meets Gorou.

Shirou's cousin is violent and a little strange but for some reason Shirou can't seem to dislike him...

Izumi Etou is starting at a new school, Egret Academy, and he is excited to join the fencing club with his childhood friend, Yuuji Saeki. The reason he’s so excited? Club President Takasaki, Izumi’s handsome senpai, is there!! He dreams of becoming a graceful and strong man just like his senpai, but Izumi hates Vice President Ibe hanging all over Takasaki. Things becomeeven more complicated when Yuuji decides he’s in love with Izumi, who’s too engrossed with Takasaki to notice! Yuuji isn't straightforward with his feelings, so how can he make Izumi return them? Who will be Izumi's love in the end?

Student council president Kyo seems to have it all – looks (he's prettier than most of the girls), intellect, and power. He doesn't even care that he is hated by many students, he has everything under control. But then super popular and incorrigible Ryosuke upends his life like a tornado, professing his undying love, kissing him, and turning up everywhere he shouldn't be! Why won't he leave Kyo alone? Why can't Kyo push him away? Can Ryosuke's devotion save Kyo from a ruthless plan of revenge at the hands of school bullies?

Since junior high, Baika adored someone, Kaneshiro, who he met again. Wholeheartedly, Baika thought it was his chance to persistently pursue, instead it was the opposite. Kaneshiro blurted out “I like you.” Love that causes pain, but also gives courage. A wholly story with twists and turns about people’s relations coming together!

Taguchi fantasizes about the ever-cheerful Kanzaki. Does he have other expressions besides the happy face he shows the world? One day, they get caught at school because of a rain storm and Taguchi finally gets his chance to find out.

Hisato is in love with Masaru who comes to the bath-house where he works and always complains about his poor love life...