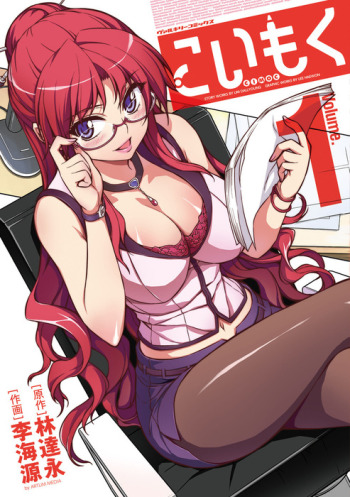 This one's a bit of a hard one to evaluate. It revolves around the Manga scene in a very overtly Meta way, and as such it feels a bit awkward giving it a review having just finished reading the characters inside of it reviewing manga.

Story: A very interesting look into an aspiring manga artist/author's break into the scene. I'm not entirely sure how much of it's fantasized as I don't know anything about the real-world workings of a mangaka, but in terms of storyline it felt very strong and believable. There's a lot of meat to each chapter, and important developments along the way. My only real complaints here are: first and foremost that the ending felt incredibly rushed and lackluster; and that there were several parts that got really hard to follow thanks to some excessive flashbacks.

Art: Gorgeous character design and settings. Loads of detail to take in, and it makes no excuses about that ecchi tag. I have some pretty serious complaints here though. First off is that there's no real way to distinguish what's a flashback and what's the current timeline. Usually artists will have some kind of vignette or other effect over the scene to indicate a difference, but there was no such benefit here and it led to some really confusing moments. Furthermore, there are a lot of similarities between some of the character designs, especially in the hair and facial details, which made it really hard to determine which character was in a given scene unless their name was directly stated. Lastly, there were a lot of really small panels with a lot of dialogue in them for some reason, and I imagine it might be partly due to the translation inflating the sentences, but it made it extremely hard to read some of the dialogue in those panels.

Characters: There's a lot of give-and-take here. Every character has some incredible traits and believable motivations that help them feel fleshed out. On the other hand, though, every character felt like they had some glaring flaws that led them to an out-of-character decision just to move the plot along. There are some really endearing character development moments that really bring some benefit to the work, but I feel like there was a lot of room for improvement here.

Overall: I feel like I have a lot of complaints about this one despite the relatively high score I give it, and that's purely because I feel like there could have been so much more. It was so close to being the masterpiece it could have been. It looks great in all the right places and has a charming story, but some very minor edits to the art and characters and another chapter or two at the end would have gone a long way towards making this much better.