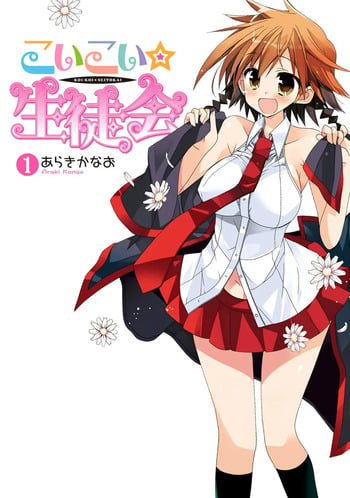 The series revolves around a private high school whose student council is chosen entirely by popularity vote. Because of this, Ken Sugisaki is the only male representative, in the otherwise all bishojo student council, that may enter the “sacred sanctuary” of the council’s meeting room. At the behest of Council President Kurimu Sakurano, Sugisaki records the minutes of the council meetings, which devolve into daily conversations about the students’ lives and interests.

Medaka Kurokami is the perfect honor student. She has exemplary grades, talent at any sport she tries her hand at, comes from a rich family, is exceptionally popular, and has just become the first ever freshman student to be elected School President! During her inauguration speech she proclaims that she will endeavor to help every student with any problem if they simply submit it to the newly instated suggestion box. But with a bare-bones student council consisting of only herself and her unwilling accomplice Zenkichi, people are unsure whether to take her seriously or not. Regardless, Medaka takes each suggestion and gives her all to fulfil any request, be it ridding the kendo hall of delinquents, writing a love letter, or helping a struggling art student find his muse.

After Medaka Kurokami defeated Myouri Unzen (the head of the disciplinary committee), she is recruited by the headmaster to join the "13 Party" - an elite and select group of 13 Abnormal students from Class 13. Medaka discovers that they are taking part in the Flask Plan, which aims to create perfect humans by sacrificing all the students in the school. It is up to Medaka and the rest of the student council to stop it.

My Wife Is the Student Council President! OVA

Rino is an orphan whose only memento of her mother is a taking puppet named Puuchan. After a generous donation from a mysterious benefactor, Rino finds herself enrolled in the prestigious all-girls high school known as Miyagami; and thus her adventure begins! With Rino’s naïve nature and Puuchan’s sadistic streak, the duo quickly takes the school by storm. From the ranks of the seemingly all-powerful Best Student Council, Rino and Puuchan change the lives of everyone they meet, like it or not!

My Wife is the Student Council President+!