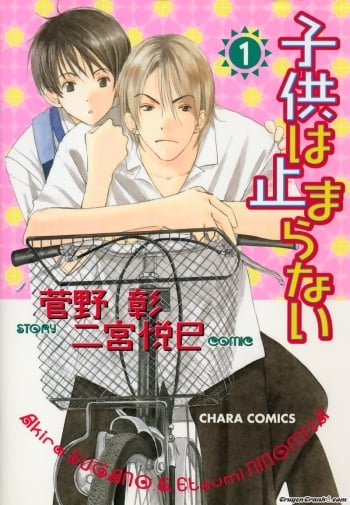 After the remarriage of his father, Takara finds himself becoming the eldest of the four siblings. Wanting to try his best as the oldest brother, Takara ends up stumbling and tumbling with his relationship between his three younger siblings. Each chapter tells the tale of how Takara bonds with each sibling.

Akira Togawa is a normal teenager: he goes to an average high school, he plays video games, he's in love with his step-brother, he's harassed by lecherous photographers, picked on by mischievous little boys, insulted by possessive young women...you get the idea. When a scruffy photographer by the name of Kaoru Nakahara has a premonition of love (or so he says) and takes a campus photography job, he ends up meeting Akira and falls head over heels. Will Akira learn to love the persistent pervert, or will he cling to his beloved brother?

Twins Itaru and Hajime have no one in this world but each other. After their abusive mother disappears, they are separated and sent to live with different families. They keep in touch via letters, swearing to always be there for each other, but one day, Itaru falls in love with a boy called Ryouta. Hajime is plunged to the depths of despair and stops reading Itaru’s letters, blaming his brother for abandoning him. And then Itaru dies in a car accident a few months later, clutching one last letter meant for Hajime. What did Itaru want to get off his chest? What part did Ryouta play in Itaru’s death? And who is this mysterious novelist who may just be Hajime’s salvation?

Yutaka gets his yearly letter from his beloved older brother, but this summer something is different about it...

Aoi Yoneda has been taking care of his step-brother for ten years, ever since their parents died in an accident. Haruto loves his big brother, however, he made a promise to himself to stay by Ao-kun’s side as a brother until his 18th birthday. But then after? Only time will tell what happens between these two step-siblings.

When Satoshi Kashiwabara went to Nichoume, he fell in love for the first time with Nichoume's prince; a known playboy. But right after they kissed, he received a message saying his father was in critical condition and left the hotel. However, a few days later, he found himself living with his step-brother, who turned out to be the prince himself!!!

The four Toura brothers have already succeeded in driving out all of the housekeepers that their father sent to look after them. But what will they make of Shinnosuke, their new live-in housekeeper... and a male one, at that?

Haruki used to be close with his younger brother Yuuki when they were younger, but they've since drifted apart. Haruki wants to use the chance of being alone with Yuuki to get on better terms with him, leading him to discover Yuuki's particular tastes.

Taiga works at a publishing company, and thanks to his sister's sudden marriage, author and Taiga's best high school friend Shu has become his brother-in-law. But then his sister suddenly disappears! Left behind, Taiga ends up taking care of his little brothers and living against his will with Shu. However, their lively and raucous lives accidentally draw them closer together!