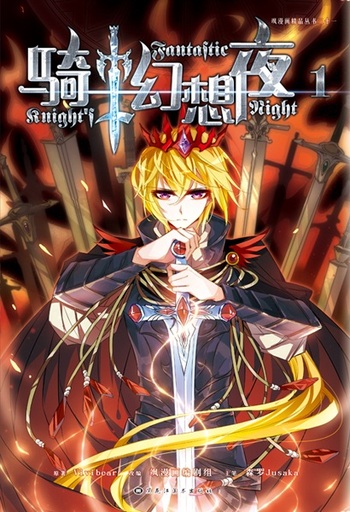 The legend has it that 16 years later, devil of blood tribe will reborn. It will bring disaster to this world. Vampire-hunting organization asked doctor Nangong to clone twin sisters to fight against it. But due to some program error, a third baby came… and three sisters began their adventure in this dangerous and tempting world…

BOth manga/manhua have really nice drawing and the story is some sort silimar but is not really silimar.... Both manga/manhua have a wonderful good story in it... so I think that if you guys like  "Vampire Sphere" then you might like " Qishi Huanxiang Ye".....

I finished Vampire Sphere in 1-2 days with non-stop reading because I just wanted to get over with reading it. I did enjoy it first, but slowly it started to become a drag to read. Although the characters are interesting and their actions, but I feel the author dragged some parts way too long and still did at chapter 95. But overall, it was decent and i recommend it to anyone who wants to read manga's similar to Qishi Huangxiang Ye or Xingkong Club.

The curse of twelve stars, a girl who plays piano with a dream of becoming a chef, because of an odd job that she pretends to be a boy. What's waiting for Yue Hui is a mysterious mansion and 12 boys who have the curse of 12 stars which fall upon each of them. What's awaiting her? Where are her and the boys' destiny leading to?A love song for 1000 years, the legend of 12 beautiful stars, everything is in Starry Night Club.

I absolutely LOVED both Xingkong Club and Qishi Huanxiang Ye. I feel they're similar in the art style, but I definitely prefer Qishi Huanxiang Ye over Xingkong club because I absolutely loved the art style of the manga and I prefer bolder colors rather than light colors. Also I feel like Xingkong's story was kind of dragged a little, but not too much. With Qishi Huanxiang, I couldn't wait to read the next chapter and couldn't wait to see what was going to happen. If you like a historical, romance and school life kind of story with a little bit of war and supernatural in it, you'd love these two manga's.

Just One Smile is Very Alluring

LuWeiWei is a top ranked female character in an online game as well as the campus goddess in real life. She gets proposed to by a mysterious man in the game, who is different from the rest. What will happen?

Bei Wei Wei, is the campus goddess, who also excels in her studies. She aspires to be an online gamer designer, and goes by the allies of Luwei Wei Wei who is in the top 10 PVP rankings, in the online RP game "Dreaming of Jianghu," After she gets dumped by her online husband Zhenshui Wuxiang, she gets a marriage proposal by the number one player of the server , Yixiao Naihe.

The story about a special service agency that deals with people’s previous lives. Whoever sows sparingly will reap sparingly and whoever sows generously will reap generously. No one knows. In this line of trade of ours, we offer you a chance to return back to your past life. Discover the origin of your troubles, seek redemption, and reshape the course of your current life. For such a service, we do not ask for money. Instead we desire a single drop of your tear.

The story is about a little Master, Gong Yao Ying, in order to accomplish the assigned tasks, she travels across the different periods. The stories are created after meeting with the famous historical figures.

Shen Ying, a foodaholic girl with no sense of direction from the modern world, came to another world through time travel. She had no money and couldn't get out of the spirit world. Incredibly talented as a martial arts master but also easily neglected, Shen Ying is like a bug in a video game. Shen Ying took Yi Qing, an upstanding swordsman, as her disciple although, at first, she only wanted him to cook for her. Yi Qing, a man of integrity and conscience, was defeated in a fight with a demon and fell into the yard of Shen Ying who later became his master through serendipity. However, Shen Ying and Yi Qing always talked past each other. Later they entered Xuantian Clan and with Shen Ying's simple explanations and his own imagination, Yi Qing gradually became an unbeatable swordsman in the world. This is a funny story about cultivation featuring two characters with strikingly different dispositions: an upright, gentle disciple and a hilarious but powerful master.

Lord Lid, The Fourth Son of the Lord Yunyang of the YongTian Kingdom. After being born in another world with monsters and magic, he tried to live leisurely, but His Father had another plan. He tried to make Lid a sacrifice so that his First Son can gain more popularity and cruelty. Lid struggles to escape from being a sacrifice and become a Lord in his own territory.

I was transmigrated into the body of a villain? Who the hell wrote this script?! And I even stole someone else's girl? And have a powerful older sister? This script keeps getting worse and worse! And there's even a divine space and ten thousand worlds? I'm definitely dreaming! After steadying himself, Wu Ming faced these new developments and continued on his journey...

A normal person, Xin Yun, received a second chance by transmigrating to an unknown world. But because he chose to indulge in women, he lost his chance to become the most powerful. When he gets caught by the force a struggle between the nine most powerful experts, something unbelievable happened, or it could be said that a miracle occurred. Xin Yun was reborn and sent back to the place he had transmigrated over to. Having been reborn, Xin Yun decided he wanted to become the strongest being together with the three top experts from his previous life!

The Villain Has Blackened Again (Novel)

Nan Xun encountered a mythical beast that could take her to different worlds. She helped the mythical beast collect merit points. After collecting enough, she can go back and change the outcome of her death. But now, now she regrets, regrets till her insides are turning green. Your mother, those merit points are collected from the scum villain with a blackening value of 100 and an evil value of 100! She only wanted to purify the souls of those scummy bosses. Fu** she didn’t want them to fall in love with her! Pervert number 1 eats people! Pervert number 2 is an evil ghost! Pervert number 3….  After Nan Xun realized they were all the same person, she closed her eyes and pretended to be dead.  The evil, charming, crazy Boss-sama gave her an evil smile: “Baby, weren’t you going to purify my soul? Come here.”