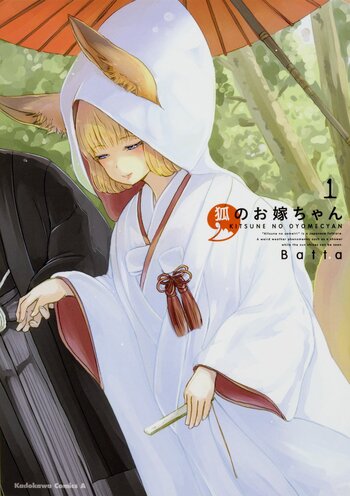 Ever wondered what these creepy ass japanese ghost ladies do when they're not cursing the living shit out of you? Well... nothing special, really. The same stuff lovebirds like you & me do. See the life of scary ghost wife and ordinary husband.

One day, Shintarou and his friend Sakura pick up a wild fox that was wounded after being hit by a car. Shintarou takes care of the fox at his father's house and names it Momiji but they eventually abandon her in the wild, with bitterness. A dozen years later, Momiji finds a human skull and follows a rite to acquire a human shape thanks to it although her fox ears and tail sometimes pop out. With her new body, she is resolved to go and meet Shintarou again with the only clue that he went to Tokyo, wanting to become a mangaka for the Champion magazine. She is helped by her Master, an otter youkai who can also take the shape of a beautiful woman and knows a lot more than her about the world.

Mui-kun always had the animal magnetism... with animals. Unfortunately, it never worked with girls until his childhood friend Yuzuriha suddenly began to take on various animal aspects, starting when she offered a dance to the mountain spirit as a resident shrine maiden. Now she involuntarily takes on the animal spirit whenever she comes across one, most of whom disdain the confinement of human clothing...

Manga about defenseless kitty who gets lonely very easily.