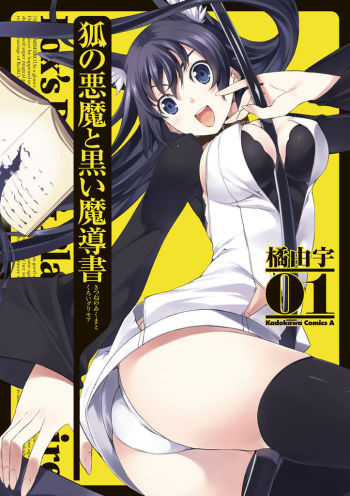 If you're looking for anime similar to Kitsune no Akuma to Kuroi Madousho, you might like these titles.

Yuuto Amakawa has had a tough life. Seven years ago, both of his parents were tragically killed in a car accident, leaving him without a single living relative. His friend Rinko Kuzaki has taken care of him ever since. Yuuto's sixteenth birthday has arrived, but instead of a birthday gift of a normal life he meets Himari, a catgirl samurai who swears to protect him. Within weeks Yuuto's life is thrown into chaos as his family's dark past comes to light. With demons appearing around him, Rinko and Himari fighting for his attention and a sinister plot beginning to surface, can Yuuto live the normal, safe life he wants so badly?

Tenchi Muyo! The Night Before The Carnival

Still recovering from the attack by the wanted space criminal Kagato, princess Ayeka and scientific genius Washu plant a replacement Ryo-oh seedling to grow a new ship. Ryoko, meanwhile, is using any means possible to win the heart of the hapless Tenchi – including stealing romantic comic books from Sasami!  Removing the other girls from the picture, Ryoko is left with only Ayeka as a love rival. Will either of them be accepted by Tenchi as more than just friends?

The babes and boys of the Occult Research Club are Back! Lovable loser (and bust buff) Issei and his clan of bewitching beauties return for a new season of supernatural tussles and sexy shenanigans—featuring old friends and new enemies! Now that all the girls live in Issei's home, life seems like nothing but fun and scantily-clad lounging…for now! Join Rias, Akeno, Koneko, Asia, Xenovia, Gasper, and everyone's favorite Harem King Issei as they fight, fumble, and fondle their way through their demonic high school lives.

Issei, Rias and the rest of the gang continue to have a variety of misadventures with plenty of bountiful breasts to be exposed along the way. Whether they're transporting to an uninhabited island to sunbathe in revealing outfits, accidentally turning Koneko into a pervert with personality-changing tea, or getting a chest workout while making udon dough from scratch, these high school demons have plenty of fun with their friends.