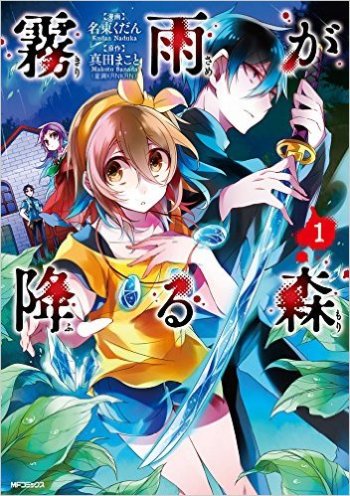 Madotsuki is a girl who always dreams of the same landscape. One day, she decides to start exploring her dreams, searching for answers. There are some doors in her dreams. When she opens them, she finds all kinds of things...

So another one of my amazing recommendations this time between two manga that are based around RPG Horror games, both have high levels of suspense and have an interesting storyline but both also have that element that makes us want to play the game or just constantly compare it to the game. Either way, if you enjoyed one of these you might want to check out the other, just because xx

With their school shutting down for good, the students of a small town were heading for different directions in life. For Minase Tamaki, who was staying in town to find a job, it might be the last time she sees her crush Shindo Yuuma, who is moving to the city to attend a new school. She asks him to do a little prayer that is supposed to help people cross paths again even if they become separated. But her classmate, Yuzuki Erina, overhears their conversation and, out of jealousy, decides to ruin her plans by inviting their entire class on what was supposed to be an intimate spell. As soon as the charm goes off, the ground splits in half, swallowing the entire class and, when they wake up, they find themselves in an old school campus. Unable to find a way out, they wander the corridors, trying to figure out where they are. But it seems that the building isn’t as abandoned as they thought it was and, in fact, something evil is lurking in the shadows.

Tokage, a soul cursed to forever wander the world, unable to rest nor to join the reincarnation cycle, is now looking for its release. This time Tokage enters the body of a newly dead girl named Yuuka, a shrine maiden. This body requires continual recharging from a highly spiritual person, whom the dead person must have had an attachment to. This person is Shinobu, a younger boy, who also lives in that shrine. Thus starts the adventures of Tokage and Shinobu in a world gone mad, amidst the chaos and carnage that gravitates to an unsent soul draw.

Takashi is haunted at night by visions of a woman begging for her child not to be taken away. He sometimes sees strange shadows outside his window, but tries his best to simply ignore them. As his seventeenth birthday approaches, the shadow becomes more and more clear, and the vision more vivid. Slowly, the once kind and caring Takashi becomes indifferent, and eventually cold and biting towards everyone around him. What does this sudden change in attitude have to do with his seventeenth birthday?

In this forest, there is a bear only children can see. If you can escape the forest after spending one day with that bear, you can become whatever you desire. A young girl sets foot into the dense forest of legend and what she encounters there was.

Aspiring teen dollmaker Kashiwagi Kotoko runs into her favorite doll designer, Fool - and he curses her with a shinshoku kiss. Now Kashiwagi has to make dolls for her or else Fool will turn her into an old lady!

After an earthquake, a mysterious forest appears in an area close to the 10 year old protagonist's new home.

Long ago, Tenshin Elementary School was torn down after a teacher fell down the stairs and died. In its place, Kisaragi Academy was founded, a place where Satoshi, Naomi and their classmates attend class. They and other members of Class 2-9 have stayed after school one day to prepare for a cultural festival, but when a strange earthquake occurs, the group finds themselves stuck back in time at Tenshin Elementary, unable to see each other or escape. Now, the students must try to find each other and a way back to their reality, before they too become nothing but a corpse.

There stands a house in the forest where the wind blows and 'monsters' frighten children. A man lives in this house, as well as a number of spirits.

Lamento: Beyond the Void

The Ribika are a race of cats possessing ears and tails. Their bodies are lithe and nimble, and they live in the land of Shisa. However, a curse called the "Void" is spreading through the forests. One of the Ribika, Konoe, lives in a small village called Karou. One morning, he wakes up to find that his ears and tail have turned black. There is also a symbol on his body; the mark of the curse. Konoe embarks on a journey through the forest to find the truth.