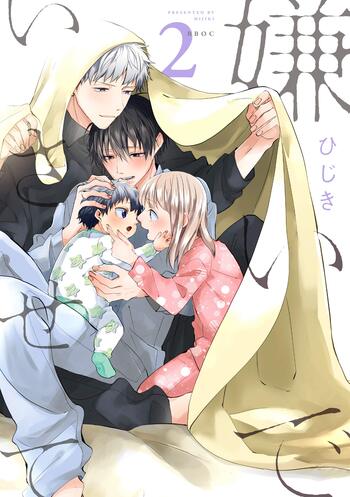 i loved this with all of me , it was so adorable and is just as good as the first oneeeee

i still think the art work and characters are amazing and tghe story just got even better , i love how they stood up for eachother when the men who raped him try to talk to him and i loved how the family developed to get so close and loving plus the baby is so cute and especially when he asked him to marry himmmm

Naoto and Hazuki have now been living together for a bit and have a baby. We see Shizuku taking on the role of the big sister and we see Hazuki's mom, the president of a large company, generally excited about feir grandchildren.

We see the couple learn to rely on each other more when they have problems. Hazuki has some insecurities over being a good parent, worrying that fe's inept. Naoto is at first still a bit insecure about being an omega and specifically worries about introducing femself as Hazuki's partner, but over the course of the story fe gains more self-confidence and is even able to say that fe's glad fe's an omega (though, realistically, this major self-esteem shift is a bit too abrupt). Naoto also has to cope with traumatic feelings and anxieties related to feir rape from years ago resurfacing. At first, I appreciated how it seemed they were showing that trauma never fully leaves you and is something you'll always have to cope with, but then I was a bit disappointed when they "resolved" it and acted as though feir trauma was solved forever. I mean, I realize that a clean resolution makes the story feel better, but it also makes it feel simplistic. I also didn't really care for the way this manga seemed to be implying that victims should just move on and that seeking legal action is a bad thing to do (for example, when Naoto is complimented as being "kind" for letting feir rapist go in chapter 5). And, related to that, this manga leans on problems being resolved privately with back-room deals or people punching each other rather than through the court system.

this is a manga i come back too as comfort! it has a great story that links back to the development the charavter went through in the first volume and continued to develop the characters personalitilies, flaws, insecurities and morals. it really makes them feel more human and relatable so i definetly reccomend you read this!

BTW an announcement for the 3rd season has been made

I have no idea why i love this manga but i do ( the children is so cute) anyway you can read this on mangaowl.net