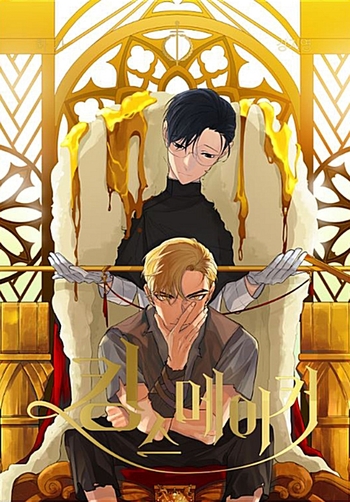 I never thought BL series could have such a well-developed story until I found out about King's Maker.

A manga like this is not something you see every day. When choosing a comic to read we usually go for something that looks appealing to the eyes, and that is exactly what King's Maker is in every single panel. Not only it has an appealing art, but it also does an amazing job of capturing the characters' emotions and making us feel the need to know more about them. Needless to say, I was already hooked on the story in just a few chapters.

The plot is fascinating. It is not super elaborated nor has any big plot twists, but it doesn't fail to be entertaining. The romance also flows very naturally and doesn't force any relationships, which is rather rare in a comic of this genre.

However, the biggest highlight of this manga is, without a doubt, it's characters. The villain is great and serves well his purposes. He is not someone we sympathize with and I am glad the author didn't try to give us some dumb backstory to justify his actions. On the other hand, the main protagonist is someone that grows a lot through the story. He is already likable at the start but becomes even more as the story goes.

To conclude, I believe you should give King's Maker a shot, even if you are not a big fan of BL. It is a fun read and has a nice ending, so I doubt you are going to regret doing so.

If you want to know where to read this comic look at the answers of this review.

this is great! the plot is interesting the art is good the charecters are lovable (exept for the bastard king) I really like reading about rebellion and bl so I might be a bit biased. the king is an unforgivable villain and he deserved his ending, I also liked that the auther decided not to give him a tragic past to excuse his despicable crimes

I honestly was a little surprised going into this series because when I initially picked it up I was not aware of all that gay I was about to read about. I'm going to rate it highly for the art and characters, but personally I think this is unreadable if you are uncomfortable reading about a gay king with kids that he does "stuff" with.

This manhwa HANDS DOWN make all other BLs that primarily centre its storytelling on smut look inferior. I was sent through a wave of emotions every chapter, the color palette gives gold a whole new damn meaning, the architectures are shiny AF, and the dark themes were portrayed to a disturbing BUT not graphic extent without glorifying its wrongfulness. IF you're sensitive to sick shit like pederasty, heads on stakes, child abuse, y'know those kinda disturbing stuffs then a big heads up coz there WILL be stuffs like these in the manhwa.

Let's be honest everyone likes protagonists who escape the slums, build strengths, then rise to power in the most kickass fashion possible. Well darling here I present to you Wolfgang THE MAN Goldenleonard! This lad let his old abominable man tastes a sip of revenge from the people, of course Soohyuk deserves more credibility in terms of greatness. His shrewd wits and tacts helped kept Wolf's impulsiveness in check, and is basically the real MVP of the story. Without Soohyuk's presence Wolf's character wouldn't progress to a capable monarch at the end. He literally the King's Maker y'all. Credits are also given to Theo a terrific father figure & Sys a flirty aide in the siege attempt who's also a sassy charmer.

Folks the artists have to redraw Wolfgang's earlobe to fit his desired "physiognomy" lol, go feel their pain.