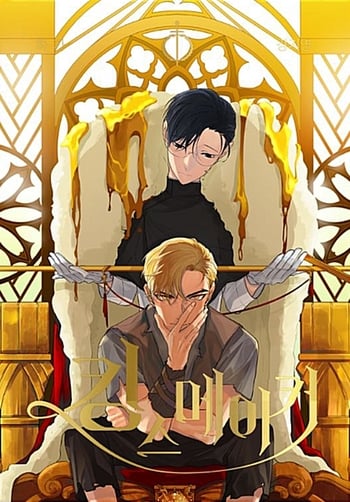 The Chart of Priest

When the hero Cliff defeats the evil Demon King, he's left with an unwanted parting gift: a devastating curse that viciously attacks his body and mind. For many years priests, healers, and even Cliff's powerful dragon companions have tried to relieve him of this affliction, but none have succeeded. When the young priest Edward Granche is involved in an unfortunate incident that causes him to be removed from the Holy City and assigned to a remote post in the countryside, he meets the pained, prematurely-aged Cliff and is determined to help him. In his mission to relieve the veteran hero of his suffering, the two men begin falling in love.

Both of these boys-love webcomics have an actual plot with interesting characters in a medieval fantasy setting.

I don't know how read a manga, pleas tell me how

Her Tale of Shim Chong

Two very different women find themselves making the same wish - to leave this world behind. One is Shim Chong, a young beggar living off the kindness of others to support herself and her blind father. The other is the bride-to-be of old Chancellor Jang, sold off to him for the sake of her family. When Shim Chong rescues this new bride from the river, their relationship triggers both love and hidden intentions. But will these two women be able to find their way forth in a world that favors men?

Both stories involve a person living on the streets who befriends (and eventually falls in love with) someone who is "property" of the king/ruler.

Wolfgang and Shim Cheong have very similar personalities. They are both very wild and rowdy, yet they want to stand up for the poor/homeless. When their love interests, Soohyuk and Madame, teach them how to act like a noble, they are very quick to learn.

Millions of years have passed since the times of legends, when the worlds of man and gods were still the same. In these times it was the desires of man that moved the world. It is the era of the 500 year war: The warring states period. Kingdom is the story of a young boy named Shin who grew into a great general and all the trials and bloodshed that lead him there.

Empress of Another World

Crossing over into another world and time after a freak accident, Korean highschool girl Sabina is taken in by a duke of the Crentia kingdom— only to soon be offered up to the ugly old emperor as a concubine. When the king is killed by a mysterious assassin, Sabina must face the poisonous circle of other candidates in a battle for the royal seat. Can she attract the loyalty and affection of the men and women she needs on her side to survive?

Having a handsome, kind and caring boyfriend like Elios means the world to Emma. Even a look at him makes her heart flutters. But little does she know about a secret lies deep in their relationship. What is the said secret?

Love is the new kid on the block when he runs into the Peach Club, the local gang. Simple and gentle, with an interest in sex toys, Love isn't looking for trouble. Too bad the gang's got plans for him. And so does their leader, Peach.

Emperor, Stay Here, Your Knight's Getting off Work

The guard leader Leon, who appreciates a good work-life balance, and Emperor Oso, who wants to spend all his time with Leon. Will these two ever escape their current employer-employee relationship?

He’s the ruler of the country of Roinne; she’s a typical Korean teen, and his 100% perfect girl. For the rich and powerful Jarte, he wants nothing more than to take this girl, Jay, for his own, and together the two begin a tentative, tender relationship. However, Jay and Jarte’s lives will be nothing but simple, as insecurities, assassins and rivals in love stand in the way! Will the two manage to stay happy together?