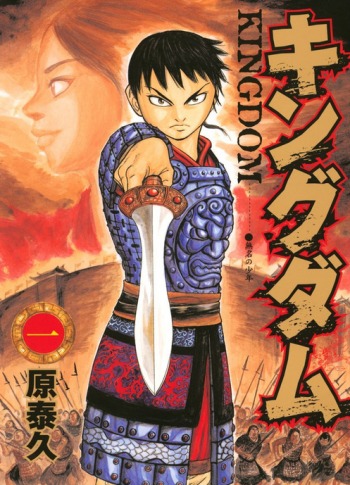 There, that's all you need to know, right? Now go read it!

Kingdom's story is quite impossible to summarize. It's a long-running epic, taking place in the Chinese Warring States period (starting around 475 B.C.). The plot is based on the actual history, although of course adapted to make it a better read - beware spoilers if you ever read up on the Warring states period.

So, how does Kingdom adapt this period? Well, it goes through the story in a way that is actually typical shounen: by following a young orphan boy who wants to become the greatest general under the heavens. However, as you go further, you'll realize that he'll never get there in the "shounen way": you do not become a great general by merely being the strongest, or by shouting the hardest. You need strength, of course, but also a mind for strategy, the capabilities to lead people into battle, and ways to deal with the politics that important military people get drawn into. And it's very nice to see how Shin grows as a character, and evolves to learn how to be a leader.

The storytelling is well done, with a constant, smooth progression and slowly builds up to constantly more important battles - one even more epic than the other. The stakes become higher, on a national as well as a personal level - because Shin gets more responsibilities, which means screwing up is a lot worse. Conflicts are realistic and complex, and aren't solved just because the main character swung his sword a couple of times.
The first arc is a bit more of a drag though, which is about 40 of the currently almost 500 chapters. After that it picks up well, with more intense battles, wars and later on interesting political conflicts - which may be a turn off for some, but I personally appreciate it a lot. Even those political conflicts are able to build hype, and when this manga really gets going it's always goddamn awesome.

Also worth mentioning is the fact that the wars aren't just fought out by doing '1 vs 1' battles or by sheer force of numbers: strategy plays a very important part in every fight.

The cast in this manga is huge too - the downside is that apart from Shin (whom I talked about before) only a small amount of people are really expanded upon. Lots of characters are made just to be "a powerful enemy or ally" or something like that - they serve one or two purposes in the story, and that's that.
The positive side of only having a small amount of characters that are fleshed out, is that those are really well done. Especially the political arcs are interesting to see, because those are the best for fleshing out and developing characters.

The artwork needs some getting used to at first, both because the early art isn't that good and because of the style which looks a bit strange at first (especially the character's designs and faces). Reading on, the art gets better AND you get used to the style, and you'll get some great art, depicting war - and other kinds of battles - in all it's violent glory.

I think the score and introduction speak for itself - this is one manga I strongly recommend! It's a personal favourite of mine, and even when I try to look at it more "objectively" I'm rating it really highly.

I honestly don't know what to say but just read it. It seriously is my favorite historical manga so just do yourself the favor of reading it. Also the art is at Berserks level and that's saying something.