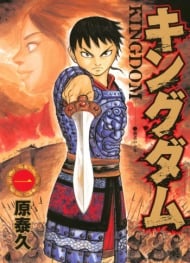 Millions of years have passed since the times of legends, when the worlds of man and gods were still the same. In these times it was the desires of man that moved the world. It is the era of the 500 year war: The warring states period. Kingdom is the story of a young boy named Shin who grew into a great general and all the trials and bloodshed that lead him there.

I absolutely love Kingdom. There, that's all you need to know, right? Now go read it! What's that? I need to "say a bit more"? Well ok then... Story and characters Kingdom's story is quite impossible to summarize. It's a long-running epic, taking place in the Chinese Warring States period (starting around 475 B.C.). The plot is based on the actual history, although of course adapted to make it a better read - beware spoilers if you ever read up on the Warring states period. So, how does Kingdom adapt this period? Well, it goes through the story in a way that is actually typical shounen: by following a young orphan boy who wants to become the greatest general under the heavens. However, as you go further, you'll realize that he'll never get there in the "shounen way": you do not become a great general by merely being the strongest, or by shouting the hardest. You need strength, of course, but also a mind for strategy, the capabilities to lead people into battle, and ways to deal with the politics that important military people get drawn into. And it's very nice to see how Shin grows as a character, and evolves to learn how to be a leader. The storytelling is well done, with a constant, smooth progression and slowly builds up to constantly more important battles - one even more epic than the other. The stakes become higher, on a national as well as a personal level - because Shin gets more responsibilities, which means screwing up is a lot worse. Conflicts are realistic and complex, and aren't solved just because the main character swung his sword a couple of times.The first arc is a bit more of a drag though, which is about 40 of the currently almost 500 chapters. After that it picks up well, with more intense battles, wars and later on interesting political conflicts - which may be a turn off for some, but I personally appreciate it a lot. Even those political conflicts are able to build hype, and when this manga really gets going it's always goddamn awesome. Also worth mentioning is the fact that the wars aren't just fought out by doing '1 vs 1' battles or by sheer force of numbers: strategy plays a very important part in every fight. The cast in this manga is huge too - the downside is that apart from Shin (whom I talked about before) only a small amount of people are really expanded upon. Lots of characters are made just to be "a powerful enemy or ally" or something like that - they serve one or two purposes in the story, and that's that. The positive side of only having a small amount of characters that are fleshed out, is that those are really well done. Especially the political arcs are interesting to see, because those are the best for fleshing out and developing characters. Art The artwork needs some getting used to at first, both because the early art isn't that good and because of the style which looks a bit strange at first (especially the character's designs and faces). Reading on, the art gets better AND you get used to the style, and you'll get some great art, depicting war - and other kinds of battles - in all it's violent glory. Overall I think the score and introduction speak for itself - this is one manga I strongly recommend! It's a personal favourite of mine, and even when I try to look at it more "objectively" I'm rating it really highly.

Kingdom asks the question "what if the Warring States period of China was a Shounen?" and makes it happen (Yes I know this is a "Seinen" but let's be real, there's friendship power and shit, it's a shounen). Kingdom is a great manga that is a fun take on one of the most iconic periods in the history of China. This is a good manga so lets start with the pros. The Pros 1. The rich history. The biggest pro of Kingdom is that it already highlights a period that is rich to explore. The Warring states period was a tumultuous time with plenty of epic battles and political intrigue. Kingdom simply does a good job recounting this time period with some personal character drama. A lot of the history is just straight-up wrong but the way the story feels is accurate, which is the most important part.  2. The art style. The art isn't perfect but has style and it works well in the story. The way the illustrations are make it really feel like a Chinese Epic similar to Red Cliff or Hero. Not quite as visually stunning but the feel is there. I also love how many of the positions that people take are similar to the poses people would take in a Chinese Opera.  3. The characters. All of the characters are relatively well done with clear motivations which work well within the narrative. People fight for personal glory, for money, for their country, for independence, and for deep-seated historical wrongs. The large strokes of real history together with (mostly) fictional characters helps put together a narrative that helps readers understand, in broad strokes, what the warring states felt like for people at the time. 4. The politics. The politics of the warring states is deep and exciting. While simplistic and shounen-y (the political ideology of the main villain for the first few arcs of the manga is literally capitalism, LOL) the way political intrigue is handled is generally well done.  The Cons 1. Too much focus on the Battle shounen elements. For the most part the battle shounen is fun, but there are times where it dips too much into it. There are points where a character can go into a military camp and kill an entire regiment by cleaving them in half. There are other points where the mysticism of some characters go too far and make the story too magical . I think you can't divorce the mysticism of Chinese culture at the time, but it's often too literally taken in the story and I think is misplaced as Shounen powers instead of a way of thinking or as an influence in politics. There are also aribtrary distinctions between "instinct" vs "strategy" and everyone being part of a legendary group. It helps readers understand what will happen but it's also a very odd and strangely simplistic way to categorize some generals in regards to others. 2. The lack of focus on cultural/systematic differences. What made Qin special in the Warring States was their adherance to the strict ideology of legalism which led to a society that was well-trained and disciplined for war. The differences between state ideologies were a huge factor in the Warring States period as China was still looking for the ideology to lead China (many of which were burned away by Qin Shi Huang). Most states are shown as largely the same, with the main differentiator being people at top having different ideologies. This is not the way it happened. 3. It's a bit bloated. This is not a tight story. The warring states period is an epic story but often times characters are highlighted and dropped quickly. The main cast stays mostly the same but at the same time, it feels like 25% of the characters are afterthoughts.  4. The pacing. The pacing in some battles can really drag on. At its current pace, this manga is going to be Hajime no Ippo or Detective Conan levels of length. The slow pacing isn't too much of a problem but to anyone who's going to read this, be prepared for this to last a long time. A good and bad thing, in an industry rampant with Hiatuses due to overwork of their authors, I wouldn't be surprised if a long break is going to happen sometime. That being said, Hara seems to have the robust health of someone like Oda or Mashima and less like Miura or Togashi.

I honestly don't know what to say but just read it. It seriously is my favorite historical manga so just do yourself the favor of reading it. Also the art is at Berserks level and that's saying something. 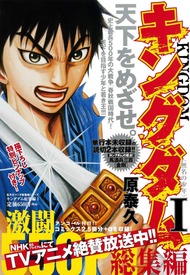 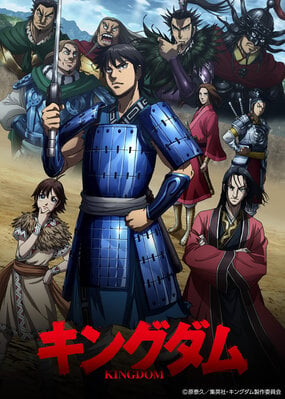 Muteki no Zone. KYOUKAI in the ZONe CM