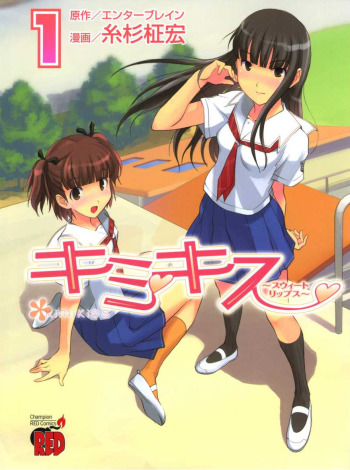 Two years ago, Tachibana Junichi got his heart broken by a girl who didn't show up for a date on Christmas Eve. Now a second year student in high school, Junichi spends his days inside his closet planetarium, going to school and hanging out with his friends Tanamachi Kaoru and Umehara Masayoshi.

Coming to earth to live the high-school life he's always dreamt of, Hirito finds himself in a bathroom on top of a naked girl! It turns out she goes to the world renowned Konoeghara Academy. Hirito is shocked to find the school only consists of seven students in total! Why in the world does the one of the most prestigious academies in the nation only consist of seven pupils...?

One day, high schooler Hoshina Shuuji, who can sense peoples' feelings through his ordinary five senses, accidentally sees the popular Ayachi Nene masturbating in the school library. Nene is a member of the Occult Club, and commonly offers her classmates advice through fortune-telling. When Shuuji goes to apologize to her, he learns two things: the Occult Club is going to be closed due to lack of members, and Nene is actually a witch that is collecting 'soul fragments' that come from strong emotions. After he accidentally absorbs her collection of soul fragments, he decides to join her club, help her collect more, and try to find a way to give back the ones he took.

In a world not unlike our own, mages are commonplace and schools are separated between normal students and magic users. Yuma Kohinata is a student at one such school, Mizuhosaka Academy. On the way home from buying chocolates with his androgynous friend Jun, Yuma is given chocolates from school idol Haruhi Kamisaka; things become even more complex once the magic wing of the school has a gas explosion, displacing all of the magic students into the normal section – including Haruhi! Now, Yuma finds himself thrust into the world of magic, and must deal with the various women who vie for his affections; can he juggle his priorities and continue to pass his classes?

One of the popular sightseeing spots in the town Hoori is the sacred sword Murasamemaru, embedded in a stone. No one has been able to pull it out, until Masaomi somehow broke it in half. He has to take responsibility for his actions by “Marrying” the ‘shrine maiden’ Yoshino. What lies ahead for him is a peculiar and mysterious life, including his new fiancee, a mysterious girl who only he could touch, and the secret behind the curse that remains on the town. What will become of Masaomi’s love amidst his rapidly changing life? The answer lies within the Murasamemaru in his hands.