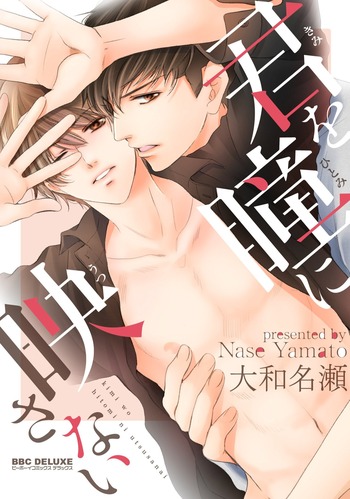 If you're looking for manga similar to Kimi wo Hitomi ni Utsusanai, you might like these titles.

Naoto, a college student, meets Kou after a crappy day in which he misses his school entrance ceremony, loses his job, and then it turns out his hot water at home is shut off. So he has to go to the bathhouse Kou works at. Initially Kou looks young, gentle and beautiful, but soon enough Naoto learns Kou’s true nature—he’s brash and quick to anger, much older than his appearance hints at, and not nearly so naive (at least, not in the way he appears). But his body is nonetheless small, and so Naoto doesn’t want Kou to take up all the bathhouse jobs on his own. Thus, Naoto starts working for the bathhouse when he can. Besides, even though Kou isn’t who Naoto initially expected him to be, Naoto can’t help but still be intrigued by the small man.

Have a similar feel with two guys working together at a bathhouse/hot springs inn and falling in love. If you enjoyed reading one, you'll probably enjoy the other as well.

Jean Claude Battle is an affluent French aristocrat and a world renowned artist. Even though he seduced the hotel concierge Tooru into his bed, he never made any promises regarding their future. Tooru is aware that he is just one of many, yet he couldn't resist the French aristocrat's advances...

Recently, the Royal Fort Hotel Tokyo has been receiving many concerned inquiries about the availability of more reasonably priced packages and the usage of relaxation facilities. 'Why does this matter?' you might ask. Well, it matters because it is just the cherry on top of the Seriously Super Stressful Sundae that the Royal Fort Hotel's young general manager Yoshitomo Hasunobe has been served by the Melqueens hotel! A.K.A. their new RIVAL. Just thinking about it makes him want to flail his arms in the air and scream! Do they have some kind of personal vendetta against him!? While huffing and puffing may be cathartic, Yoshitomo must do something about the rivalry. He must find his brother, the hotel manager, to work something out. But first, it seems that GM Hasunobe must tend to one of his guests who appears to have gotten too drunk and is passed out in the lounge! Oh, what a job!

As a concierge at a high-class hotel, Chiaki is used to accommodating his guests’ every desire. But when he learns that Harry Christophoros, a Greek millionaire, has requested his personal services, Chiaki is puzzled. How did he manage to attract the attention of a foreigner he’s never even met? When he finally greets the handsome, mysterious visitor, neither man can deny the chemistry between them. Is Chiaki prepared to provide the ultimate in hospitality?

Sakura, who continues to live alone even after reaching the age of 30, decides to marry in order to reassure his parents. But the truth is… he’s an otomen who likes cute stuff and is a closet gay man. Keeping these circumstances hidden, he goes to a marriage counselor and reunites with his younger childhood friend Yuusuke by chance.

Ashitaka's an out and proud gay man, trawling for booty calls at his favorite gay bar - but only bottoms need apply, because Ashitaka only tops! His first attempt at gay sex three years ago ended painfully and embarrassingly, and he vowed to never yield his ass to another man again - but fate has decided to throw the very man responsible for his 'bottom trauma' back into his life, and the guy's looking for a fresh start.