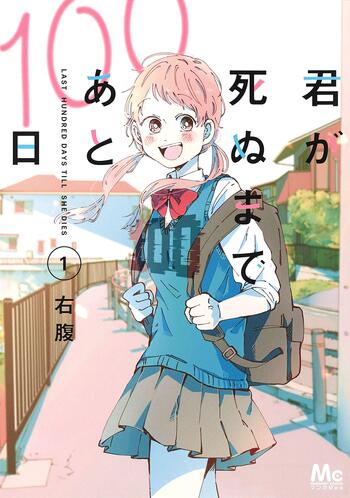 If you're looking for manga similar to Kimi Ga Shinu Made Ato 100Nichi, you might like these titles.

Ibuki, returning to his childhood town for his grandmother's funeral, is not at all shocked to find that nothing in the little town has changed. Except that he finds out that his grandmother had remarried and that he is now succeeding her as the "Mononokemono."

In a certain hot spring town lives a high school girl who has a "Medusa" syndrome.

It’s been three years since Himawari lost his parents. One day, feeling particularly annoyed about having to live with his relatives, Himawari finds himself visiting a shrine. He soon learns that it is an unusual shrine with unusual people such as the shady guy, Kaminaga, and the priestess, Maru (who actually is a goddess). Soon, he becomes an acquaintance of this weird crowd and winds up helping them to grant their worshippers’ wishes. While all the time he was working to grant others’ wishes, his wish remained ungranted. However...

Mukai Sachi is extremely unlucky. Stubbed toes, lost items, bird poop... it all happens to her. Her most unfortunate problem, though, is Gokurakuin Misako, the only member of the Occult Research Society. Misako is an honors student, beautiful, very strange, and friendless. She is interested in Sachi's "power" because she wants strange, unexplainable things to happen to herself, too. The problem is that Sachi has absolutely no interest in the occult, so Misako's continued, oddball attempts to get her to join the Occult Research Society are yet another piece of bad luck for Sachi!

Follows Shishibara Miko and Atou Mutsuki as they enjoy their daily lives by trying to understand the true meaning of human life.