Alt title: You Are My Orion 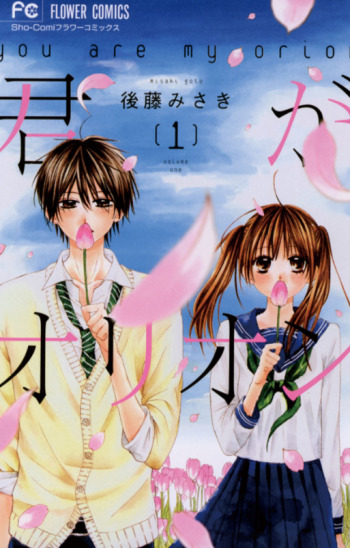 Since her parents are a little bit slow, Matsuda Erika (or Eri for short) has taught herself to be independent and extremely reliable. Moreover, she devotes herself to taking care of those around her—even if some of her classmates find her behaviour overbearing and annoying. One day, a strange new transfer student is introduced to her class. This boy speaks in choppy sentences, has little to no facial expressions, and goes by the name Nokina Kaname. Instantly, Eri feels compelled to take care of this martian-like new boy in her class.

Saki has just entered high school. She has gone to particular lengths to be sure she’s transferred to a school where nobody knows her. Why? Her brother is a well-known delinquent.Saki’s determined to have a regular high school life without her brother’s reputation raining in her parade. This would probably happen easily if Saki didn’t have a scary face and mean-looking eyes. How is she supposed to make friends!? And what about her classmate, Toro, who seems to know her past…!?

Shino was living in peace in the countryside until the day she met Kento, a boy coming from Tokyo. Black hair, glasses and smart, that boy might be unsociable but he’s nice and Shino can’t stop her heart beating very fast when she’s with him… That’s the beginning of their love…

Sarashina Tsumugi is a new transfer student who is thrilled to finally be able to go to the school her mother graduated from. It's still summer break, but Tsumugi arrives at the school early for an assembly. Almost immediately after setting foot on campus, she encounters two guys and a girl arguing apparently fighting over a ring. The girl is trying to break up the argument, but her actions don’t help much. In the scuffle, the ring goes flying through the air and lands down Tsumugi’s uniform blouse! One of the guys pounces on Tsumugi, tearing her blouse open while chasing after the ring!

For the sake of medical treatment for her younger sister, Natsume ending up moving from her home to Shikoku. In a place where no one knows her, she'll make her high school debut as a "cool beauty"! ...This determined Natsume is approached by the wild child-like Yudai saying, "enter my team"?? Eeh!!? What do you mean by team!!?

Hirahara Tsukasa hasn't always been a crybaby. Due to the death of her older sister Chihiro, Tsukasa hasn't been able to dam up the flood of tears ever since - even about little things. She is further disheartened after moving to Tokyo from Hiroshima, especially after a series of incidents cause her and her four classmates to miss the bus and be late for the entrance ceremony on the very first day of the school term. However, it is precisely this event that ends up drawing her closer to maturity and fueling her determination to stop her crybaby tendencies. And perhaps, she may even find an unexpected love on the way...

Let’s get into a time machine and return to that time. Where it was always fun and you were always laughing, to that time... "I only have three more months to live"  Yui who just transferred to a new school in the countryside becomes Ryo’s classmate. Yui who is suffering from an illness has a "wish" that she can’t tell anyone, but Ryo wants to grant her that wish but… After death, reality hits Ryo and Yui.

Ayu, an energetic and cheerful girl who lives with her cousin and his family, falls for Chiharu, a new transfer student in her class. Chiharu's surly toughness can't stand up to Ayu's cute cheerfulness, but unexpected competition and ghosts from the past may prevent them from being together.

Rika is a new shy student at her new school. She’s always had troubles making friends because of her personality. Her past best-friend, Mirai, encourages her to change before she moves to the new school. Will Rika be able to gather some courage to change herself and make new friends?

Haruna Aizawa thinks that school life is just like a monkey mountain--all the monkeys form cliques, get into fights, and get back together again. The school that she just transferred to is no exception. There's even a boy called Macharu Yamashita who reminds her of a baby monkey! It's hard enough fitting in at a new school while dealing with family problems... Will Haruna remain jaded and distance herself from everyone around her? Or will Masaru win her over with his monkey magic?