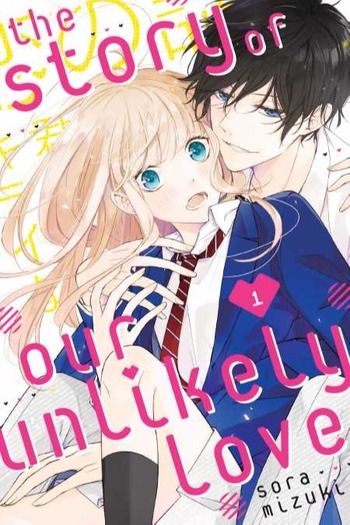 If you're looking for manga similar to Kimi ga Kirai na Koi no Hanashi, you might like these titles.

In middle school, Yuna is constantly being bullied. The only person she can confide in is her cousin, Yuya. One day, a pair of strange brothers who have just transferred came up to Yuna and wanted to be her friend! Will she find some female friends in high school?

Rio is a transfer student in Kao Gakuin, who is longing to find her "man of destiny". She met Kanna the first day at school, and he told her that he'd be her man of destiny. He's the student chair, even though he's still in junior high, and the heir to the Ohba financial group. Rio is appointed to be the vice chair (who is also called "the queen") by this "king" of the school, and then she's locked in the VIP room. What is going to happen to our "queen"?!

Bara to Sumire to

Izumozaki Sumire was accepted into Ojika High School. Her older brother Satoshi was strangely against her entering that school. But she wanted to experience high school life at the same school he attended no matter what. Subsequently the truth about her older brother’s real identity comes to light...!

3 years ago Tomoko confessed to her crush, but was rejected. On her way to the meeting point, she met a geeky guy who asked her to go out with him.

Ryuu always protects her friend Kikuyo from boys because she thinks that they are beasts. What will she do when Kikuyo finds a good boy? Why does she protect her so much?

Nonoyama, whose only friend is a stuffed animal, spent her elementary and junior high school years as a true truant because of neglect and bullying. Now having the chance to reset her life as a high school student in an out of town school, she's determined to make friends and enjoy her school life! However, her high school life is a rocky road from day one...

A story about an energetic girl and a shy misunderstood boy!

If you don't date her, you'll die! That was the prediction made to that delinquent boy. But...what will be his destiny?