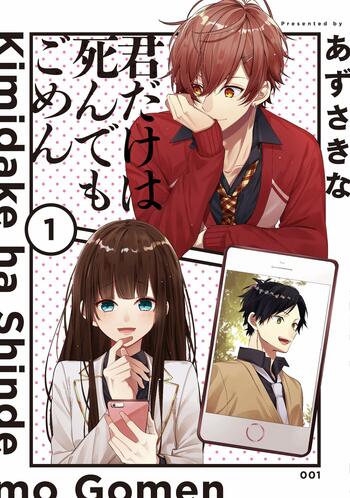 If you're looking for manga similar to Kimi Dake wa Shindemo Gomen, you might like these titles.

Ao Momose has a stalker who's ruining his love life, but instead of chasing the stalker off, he asks her out on a date so he can dispel her delusions about him.

Ikeda, high school student is a stalker of a nice, easy-going guy, Aizawa Kentaru... Aizawa's things suddenly started to get missing about which he inform his friend only to find out later that all his thing were taken by Ikeda who clumsily, quite guy claim to be his stalker & ask his permission to appoint him as his official stalker. Will Aizawa accept Ikeda's offer?

I won’t act spoiled with my boyfriend, and I definitely won’t trouble him, either. I’m trying to act like a cool and mature ideal girlfriend, but the truth is, I’m a wholehearted and annoying girl! I can’t tell anyone that I’m stalking my beloved boyfriend!!

Kaneko Takuma is a high schooler with the secret hobby of making cute accessories. Suddenly, he runs into Maki Junpei, an eccentric glasses and mask-wearing classmate. With love letters and eerie stuffed animals as presents, it’s getting hard for Takuma to ignore his anxiety over the clumsy stalker. From then on, strange things occur after Takuma sees Junpei’s adorable unmasked face. With the ideal pretty face of his that throws Takuma into a turmoil, Junpei forces sex on him in a deserted classroom…?!

A handsome apprentice "knight" with a stoic personality chooses to protect a clumsy 16-year-old maid for his 3 months of training. What's a knight to do when his maid gets in trouble? Can you guess how their relationship is going to turn out? And when his apprenticeship is over, does that mean they'll never see each other again...?

"If you don't want me to tell him, then cum for me!" Ayaka gets caught stalking her crush by the worst possible guy...! Ayaka's crazy about Masataka and secretly follows him around, but she's always fighting with his little brother, the mean Akihiro. One day, she's at Akihiro's house with some friends and hears the shower running. Is it Masataka!? ...With high hopes, she tries to get a peek, and slips on the wet bathroom floor. But, it turns out Akihiro was the one in the shower! Ayaka begs him not to tell his brother. With a sadistic look on his face, Akihiro reaches out to touch Ayaka in her most sensitive spot... Just then, Masataka knocks on the door, and she's trapped!

She's so tired to the point that she could die. How will she relieve herself?

Cree is the lead singer for a punk band. When her bassist bails, she's in a tough spot - until she meets Izsak, bass player extraordinaire. He's the answer to all her prayers! But when a pair of mysterious figures begins to stalk the band, her world quickly spins from a dream to a nightmare. Between a dark past and a shadowy future, can the light of this romance survive?