Killing Me / Killing You - Recommendations 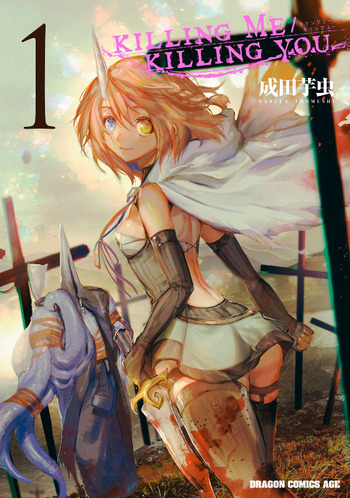 High school girl Mana, who despairing at life committed suicide, is reluctantly revived in another world. As an immortal female hero... In desperation Mana travels to the Devil's castle to be rid of her immortality. As even the devil can't kill Mana for good, she threatens him "If you can't kill me, I'll kill you. "New sensation, suicide desire comedy series!

If you liked this, then you will probably like this too. As they both feature immortal main characters seeking their own deaths!

Yuu and Mami are a young couple who decide to commit murder-suicide together. As the muddle-headed Mami struggles on a method, a bleeding Yuu resolves to try and wheedle his way out of their vow. Will either of them succeed?

Hidako Masamune is a high school student who suffers from continuous bullying by his classmates. Becoming tired of it all, he decides to commit suicide, but instead he is transported to another world along with all his classmates. When they arrive, they find that they now possess amazing abilities but he was only granted the status of a "healer," the weakest skill of all. The king decides to get rid of him by transporting him to another far away place, but not before Hidako swears revenge against the king, the kingdom, and all of his classmates.

Kousuke Kurono was an Avenger. After being raped, his beloved little sister was left out in the cold and froze to death. From the time he was 13-years old, Kousuke made use of any possible means in order to exact his revenge. 5 years had passed, he achieved his revenge, but having lived solely for the sake of revenge, at the moment his revenge came to fruition, afterwards he couldn’t muster up the willpower to live on. That’s why, with the same knife he used to kill the culprit, he slit his own throat. However, he then heard a voice; “Is that not wasteful?”. When he came to, he found not his home, his country, nor his world——It was another world.

Humanity has declined over time, leading to shortages in goods and the beginning of a bizarre relationship between humans and whimsical, sweets-loving fairies. Certain mediators help bridge the gap between the two species, as the magical, surprisingly-technological fairies are known to create various items the townsfolk need, albeit at oft-questionable quality levels. One such mediator, along with her faithful silent assistant, adorable fairy Nakata and frenemies such as yaoi-loving Y, will navigate her eventful daily life, whether it's investigating a strange factory or trying to escape the pages of a comic book.

Fate Barbatos has never tasted real power. Born with the magical skill Gluttony, he constantly hungers in a way that can't be satiated, and has been shunned and looked down upon his entire life. One day, while working as a gatekeeper for a noble family and fighting a trespassing thief, he discovers Gluttony's true power: when he kills someone, he devours their skills and feeds his gnawing hunger at last. In that grisly realization, Fate is awakened to his true potential. How many lives will he feed on to satisfy this hunger, and is the world ready for the frightening warrior he'll become?