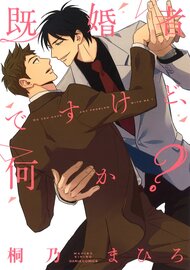 Mikado – gay, once a famous playboy and womanizer – lost his former brilliance and splendor, having a marriage of convenience. However, Mikado, who has cooled to carnal pleasures, meets a new employee – Serizawa, with whom he slowly falls in love. This guy, obsessed with sports and cleanliness, awakens our protagonist’s wild fantasies and reignites his long-forgotten desire. The mysterious Serizawa, together with Mikado, who is obsessed with him, they go on a business trip and stay for the night at an onsen, where Mikado discovers an unexpected secret about Serizawa …

THIS. IS. BRILLIANT. It's not just great plot and relationship development. It's PHENOMENAL. HOT DAYUM PAPI. Happy endings for everyone!  Let me start of by saying I'm deducting 1 for the sexual harrassment at work that Serazawa is subjected to by Mikado (which the story actually explicitly talks about). But! Tut-tut-tut, before you leave. This is the only relationship that I see works with that sexual harrassment. I mean, if it was in real life and Serazawa felt uncomfortable, instant 1/10. But something about their dynamic felt very uhh special? Serazawa (I'll just call him Tintin, because same vibes) is very pure. Not child-like, but just chill and doesn't think much about the actions. Like heterosexual bro-dude vibes, I think, and Mikado also thought. So, I did feel uncomfortable about the harrassment, but just for this story and couple, I think it could get a pass. Onto the story. No cheating going on here. Maybe cheating emotionally, but Mikado was never there mentally to begin with, because he's gay in a forced heterosexual marriage. But he doesn't neglect his wife or cheat on her. He really cares about her and she cares about him. He just can't be sexually attracted to her. The story did well in portraying their relationship as like, best friends who aren't sexually attracted. And I loved that the story didn't portray the wife as just another ditzy/bitchy woman. I've read so many BLs where women in general are treated as a nuisance. Not this one. The wife also gets character development, and finds her own path and becomes an independent, liberated woman. Mikado is a funny and good person, in my point of view. Except for the too-close touches (I don't deny he takes advantage of Serazawa), he's a great and capable boss and a caring person. Serazawa is refreshing. I really like how he's drawn. Tintin vibes. He's written well. He's not pure to the point of naive, but pure because he's an honest and trustworthy person. But that doesn't mean he's a blushing virgin. He also makes moves to create chances to get what he wants. The relationship development is written very well. Other than the sexual harrassment, the relationship develops very naturally, and I didn't mind the boss-subordinate relationship at all. And I normally do mind very much if the dynamics aren't equal. But Mikado doesn't abuse his power. He relies on Serazawa because Serazawa's a very capable person. The relationship just is very supportive, and I felt like they were both equals. Serazawa's realisation of his love for Mikado didn't feel forced and also felt natural, like a result of the relationship that they have both cultivated with each other. The art is great. Everyone is hot, some stereotypically hot in a BL manga, and some refreshing (hot Tintin!). I also really like the anatomy drawn and the expressions. I recommend you read this. It's hilarious and still carries a kind of mature (not the 18+ sexual kind, but the kind of serious air kind) tone. Great read.

Pretty decent Yaoi plot about a very exuberant but perv minded guy Mikado who is having the time of his life…by giving “it” a go with every guy he meets during nights out. But then suddenly it came to a halt when he was forced by his father to marry and become the CEO of his family company. He has a good relationship with his wife but they aren’t exactly “in love” with each other. He then meets new employee Serizawa who he becomes obsessed with and y’all know where that goes so I’m just gonna leave from there 😉