Alt title: The Days After the Hero's Return 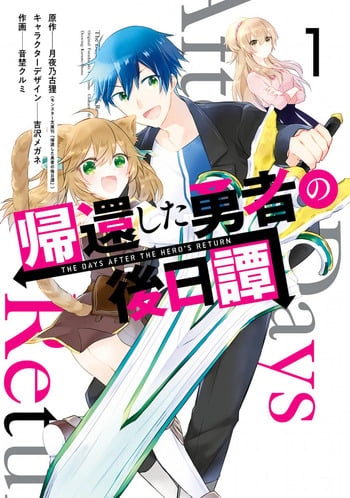 I really like this manga! Its quite different from what I imagined it to be and was a rollercoaster of emotions! I recommend this manga if you like strong mc's and magic/

It does a pretty decent job telling the story of a nice guy who's retained feir magical abilities after returning to Earth from an isekai trip. Summoning magic even allows fem to summon familiars from the fantasy world, which is primarily important because it allows the harem of girls fe had developed in that world to still be within feir harem because of a technicality with how summonings work. Harem harem harem--that's the primary hook of the story. It is definitely a bit annoying how inept at romancing Yuuya is. Or I guess I should say, how Yuuya doesn't even attempt any romancing, despite being surrounded by girls who show interest in fem. I also found the way Akane's jealousy was portrayed to be grating, and the idea of tens of girls fawning over this guy is inherently pretty silly, but those things are kinda to be expected within harem manga. I don't know exactly what I hope to see from this series, but it's been pretty alright so far, so I guess I'm just along for the ride at this point. I appreciate how the series shows fem using feir magic and boosted strength as a way to cheer people up and subtly help them in addition to being a way to subdue threats; it's not just about showing off superiority in violence (as some other series sometimes seem to be).