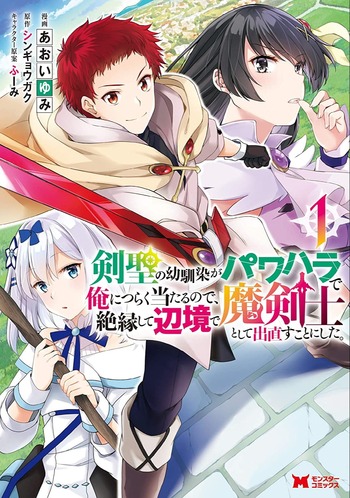 I don't care for the way they try to show the manliness of Flick by emphasizing feir strength and reliability in comparison to Noelia's, because by doing so it consequently portrays Noelia as weaker. In other words, it connects femininity to weakness and clumsiness and needing to be protected. Like, it would be one thing if Noelia simply wanted to be hugged by Flick, but it's quite another thing to have Flick repeatedly protecting fem despite Noelia supposedly being a super duper strong mage. I also don't care for the speed at which Noelia became obsessed with Flick or the shallow harem type vibes I'm getting from their romance. I am somewhat interested in what's going on with Alfine and am curious to see how that will play out.

As for the meat of the story--Flick's overpoweredness--it's honestly a bit generic. I wish that fe struggled a bit more. The best thing I can say about it is that it shows Flick using abiilities in creative ways, at least in-world. The problem with this creativity though is that magic is portrayed as stemming from the imagination, to the point that people can make up new incantations, so in that sense it seems strange that Flick's ingenuity is so basic. It would've been better if either, 1) the world had strict spells and new spells couldn't be created so that Flick had to be creative in the application of the spells, or 2) the new spells and incantations Flick invented weren't just marginal adjustments of pre-existing spells but instead made more use of imaginative ideas. The way things currently are lies somewhere between those two ideas, where Flick is able to make new spells but the new spells are pretty bland and where the new applications for old spells also come across as bland because we readers know that entirely new spells could've been invented instead.

TLDR: If you like fantasy/isikai world but with a twist, you will enjoy this. Especially if your those who like reading those independently small-time light novels that turn into mid-tier (in production value) level content.

Here is the thing. These days there is a lot of fantasy manga, web novels, anime and more. Because of this is has become common practice to add a unique element to your fantasy to make it stand out, like a  person who can only do healing magic, or a veterinarian in a fantasy world, or a person who only has really good cooking skills, you get the point. I think that Kensei does this idea well, it takes a unique add on, and tries to make its own story revolving around the idea. And even though I have only read 5 chapters the story does seem to be a decent one. For its type of fantasy, it is in the higher range of 7. It knows it will not be a 10/10 because its not trying to be the next new big idea, its just trying o have a little fun with a new idea and see where it goes. Therefore if your the type of person who likes reading all those fantasy novles but... you will enjoy it. I cant stack it up against a show like Fullmetal alchimest sinc ethat is just on another level of creation and backing, but at the level Kensei is being published at, (a independent) its fun.

Ehh. There are times when it's up and times where it's down. The main character is too dense for his own being. But has an interesting premise with the backstory. So if the author fixes his dense ness and forced romance. The story would be great. All of the characters seem to be well developed with a story behind them. Though I can't really say much since there are only a couple chapters. I'll have to see in The future chapters which route the author decides to take.