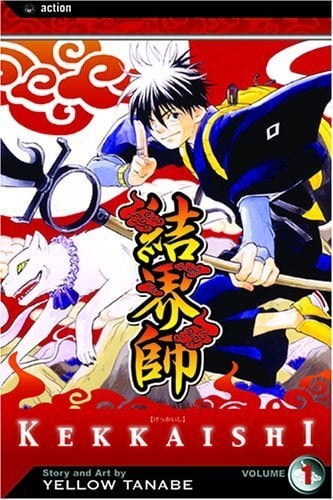 Once, the ninja village of Konohagakure was attacked by an evil nine-tailed fox spirit. This demon slaughtered many people until the leader of Konohagakure, the 4th Hokage, sacrificed his life to seal the fox inside a newborn child - Naruto Uzumaki. Now, twelve years later, Naruto is a member of the Ninja Academy; but due to his past Naruto is shunned by the rest of the village, and since he has no friends or family he plays the part of class idiot to get attention. However, he is determined to gain respect by becoming the next Hokage - the most powerful shinobi in the village. With his apparent lack of abilities, will Naruto be able to realize his goal through determination alone? 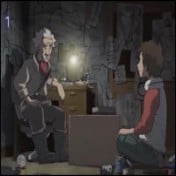 Action, violence, and protecting the ones you love.  Naruto and Kekkaishi both have many of the same themes.  The also share similar main characters who may not be as strong as everyone else, but the sure do have a whole lot of endurance.  There are a lot of parallels between these two manga.  You will probably like one if you like the other

Protecting the people they care about is what the two main characters of Yu Yu Hakusho and Kekkaishi do. Only that's just their added bonus that comes with the exciting jobs of fighting demons trying to rule the world and what not. The stories are pretty much the same if you think of it only as a story with people that have extraordinary strength and fighting skills, trying to protect the human world from demons and what not. The only thing is that these two people have huge hearts but they tend to make others feel nervous.

In 1920s America, Sister Rosette Christopher is a young nun of the Magdala Order - a military branch of the church charged with exorcising demons. Together with her assistant and best friend Chrno, a demon who Rosette has a contract with, she is sent on various missions to fight the many different monsters that lurk in the shadows. However, Rosette's main motive is to find information regarding her brother Joshua, who was kidnapped by Chrno's former ally Aion for unknown reasons. Aion has an ambitious plan that threatens the future of the world, and it's up to Rosette and Chrno to figure out Aion's plans and rescue Joshua before time runs out...

Shirihama Kenichi is a weak scaredy-cat, and his status as the karate club's punching bag has earned him the name of ‘Weak Legs'. One day Kenichi meets Miu and, impressed by her skill after she effortlessly throws him to the ground, he follows her to the Ryouzanpaku dojo. There he finds five great masters of martial arts, and driven by his desire to become stronger, he begs them to accept him as their student - though it won't be easy. Kenichi endures harsh training (and injury) from Akisame - the philosophizing Jujitsu master; Apachai - the Muay Thai ‘God of Death'; Kensei - the ecchi Chinese Kempo Master; and Shigure - the weapons prodigy. Finally after proving his determination, he is accepted by Shio - the 100-dan Karate Master, who had initially wanted nothing to do with him. Now Kenichi walks the long and arduous path to becoming a master himself, all whilst trying to protect those he cares about from anyone who would dare to harm them.

At first these two might seem different because of the setting and premise, but they share many underlying themes. we have a younger boy infatuted with a older and more skillfull female. the female leads of both stories slowly come to respect the protaginists as they grow.

Another similarity between the two exist in how tactics and skills are employed in battles as they are learned, instead of random powerups

The power to cross over dimensions is one that is deeply coveted -- a lesson that childhood friends Sakura and Syaoran learn the hard way when an unknown enemy attacks an archaeological dig in their country.  As a result, Sakura's memories are scattered to different dimensions, causing her to fall into a deep sleep.  In order to save Sakura's life, she and Syaoran must journey to various worlds in search of her memories, with the help of fellow travelers, Fai and Kurogane.  But finding Sakura's memories won't be easy, and the price for traveling through time and space is high...

In both of these manga, a boy develops a crush on a girl with a higher status than him. Their idyllic worlds are shattered, and very quickly, the boy grows into a powerful defender who will do anything to protect the girl he likes. You've got to admire that dedication. :)

Superpowers and one boy who can tap into his buffed up kick ass powers from within. Each of the main dudes (Ichigo for Bleach and Yoshimori for Kekkaishi) have crazy power, but are untrained in the ways of utilizing it to their full, face wrecking potential. So they learn as a plot moves on, a plot that grows bigger and more grand over time from the initial world-building/introductions and almost episodic content.

Balancing action and comedy, both fulfill the need for cool fights and comedy in the downtime inbetween said fights while developing and fleshing out characters. Both are long-runners and pack on the volumes so be prepared for the long haul if you're determined to see them through.

There was once an ogre mother who gave birth to a human-looking child. Instead of an ogre's horn, this child was born with a sword in hand called the "Onigirimaru" or Ogre Slayer. He has no name and is only refered to by the name of his sword. Though he appears human, he is pure ogre. Believing that he will become human once all of his kind vanished from the world of humans, he sets out on his destiny to slay all of his kind. Even now, in the mother world of Japan, he is still out there slaying ogres.

NORA: The Last Chronicle of Devildom

The powerful demon leader Dark Liege has a big problem with the hot-headed and cocky Nora, but Nora has ignored and insulted her for the last time. As punishment for his ignorance, Dark Liege seals his demonic powers and sends him to the human world until he has learned his lesson. Now, a furious Nora is not only powerless, but also has to deal with becoming a familiar to a teenage boy! Kazuma Magari decides to make it his duty to tame his new "do"and teach him some manners, but Kazuma's life gets even more complicated as a demon civil war begins to break out around him. Can he teach his dog demon some new tricks to crush the resistance, or will he fall victim to the coming battle?