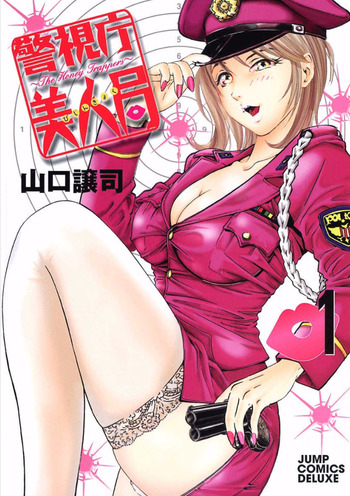 The Gals Police are two sexy police women that will arrest anyone that gets in their way of being lazy. They barely do their job, but no one can deny their beauty and attitude. Nicknamed the "Poli-Ne" ("Police Sister"), these two only think about their own beauty and clubbing while arresting the petty criminals of Kashiwa-city.

Known as the gargoyle of Inogashira Park police station because of his scary face, Saejima Toshiyuki was a loser. He's pretty much a virgin for all intent and purposes, aside from the companions that he pays for. He wasn’t always a loser though. During his high school days, he was feared as a badass, but now he is just a person people feel sorry for. He then meets Arimori Shizuka, a beautiful girl that seems comfortable in her sexuality. Toshiyuki learns that she was a high class escort that has been with over 1000 men. She was doing it out of love for her abusive boyfriend but, realizing her mistake, quits. Shizuka is now being harassed and Toshiyuki reverts back to his aggressive personality to protect the love of his life.

Nishimoto Haruki is a 21-year-old male and a newly recruited police officer. However, all his past assignments involved him dressing up as a girl in order to solve the crime. It seems that he has the feminine features that make him the only one suitable for the position. However, things get even crazier when he is assigned to be in the all female police squad surrounded by gorgeous women. He has to protect his secret that he’s actually a man but Haruki is already having a hard time controlling his urges.

Police officer Hashimoto Remi has finally obtained the job at headquarters she has always dreamed of. She is assigned to the Special Support Room which deals with preventing incidents and clearing up trouble within the police force. She finds the job is nothing like what she expected, and to top it all off, her new coworker seems to be very difficult to deal with...