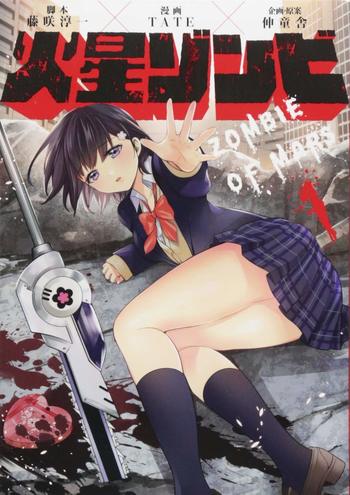 As the town is overrun with zombies, six men and women flee to a shopping mall. Having secured safety and food, they become obsessed with… love?!

Hour of the Zombie

Akira is your typical student living a conventional high school life. He has dreams and aspirations like everyone else, and an unrequited crush on his childhood friend, Kurumi. Unfortunately for him she seems more interested in Akira’s best friend, Umezawa. And yet their innocent love triangle pales in comparison to what the three friends are about to experience, even if it may yet be their saving grace. Students are suddenly turning into frenzied zombies, attacking and gorging themselves upon each other's flesh. The school is being torn apart until suddenly... they stop. With the zombies apparently back to normal, the school is now divided between the previously turned and the unbitten. But how long will this peace last? And what caused students to turn in the first place? When any of your classmates could suddenly decide to have you for lunch, a friendly face can become the scariest thing in the room.

Iori is a high school girl who doesn't know what she wants to do with her future, and tends to run away from things. One day, she is attacked by strange dead-eyed people on her way to school, only to be saved by an equally mysterious long-haired man. Later that day, her friend at school, Jion, seems to fall under the same murderous influence. To her surprise, she finds herself capable of defending herself from his violent attack. Afterward, the long-haired man she met in the morning, Zerozaki Soushiki, arrives once more, this time to invite her to become his little sister. What has Iori become involved with, and will she be able to survive this change to her life?

Zombies can turn humans by both biting them and as a STD. Now that this virus is running rampant the government is trying to control it by putting a collar on ever zombie over level 3. Unfortunately for Yukio, he is a level 3.

There's no coming back fron death, right? Of course there is, but there's a price to pay. Follow the story of a violent man who becomes a boxer and then becomes something else entirely.

A mysterious man butchers his way through a busy train car in Tokyo. This marks the starting point of a series of mysterious incidents. Renji Amamiya is attacked by Toriko, a prostitute with whom he is in love with, but he is saved by father Mitakura, a renowned exorcist who reveals to him the existence of demons...

No one knows where it started ... But when the world finally realized what was going on, it was already too late. When Maki Akagi wakes up in a lab full of corpses, she learns from a dying soldier that she is the result of a last-ditch experiment to cure humans of a virus turning them into zombies. Accompanied by a young boy who also miraculously escaped, she will have to try to get to the very center of a devastated Tokyo filled with bloodthirsty monsters. The dome located there contains the last survivors of mankind. And humanity's very survival depends solely on a few drops of this miraculous vaccine...