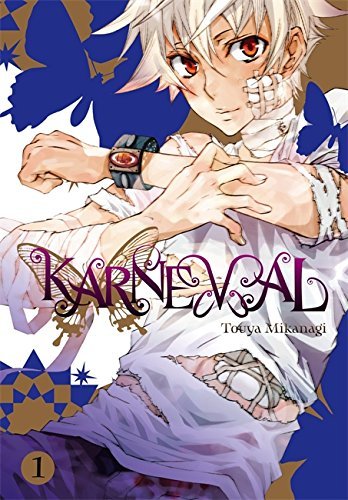 If you like Karneval, you'll like Pandora Hearts. The art is almost the same as well as the as the atmosphere. The storylines are the only things not similar (Pandora Hearts has a "darker" storyline), but I highly recommened both!

They have the same kind of mistic alice in wonderland vibe and share a lot of similarities in characters.

In a few ways they are similar, like the valugra and the the domons out of D.Gray-man

Along with the organisations Circus and the Excorcists

After losing his memories in a traffic accident three years ago, Haru is now living with Kiriyuu, his saviour and legal guardian. But after a school trip where he and his friends wander in an ancient lab, Haru discovers that there might be more to his lost memories than he thought.

The concepts of these two are completely different but the relationship between the two main guys I feel is really similar. Gareki and Touma being the more knowlegable guide, while the protaganists Nai and Haru are the "special" ones that accomplish their goals with the help of their friends.

Having been kicked out of the orphanage, a despairing young man by the name of Atsushi Nakajima rescues a strange man from a suicide attempt--Osamu Dazai. Turns out that Dazai is part of an armed-detective agency staffed by individuals whose supernatural powers take on a literary bent!

Karneval I would argue is a bit more bishonen-based, as it is marketed as a josei series, versus a seinen like BSD. However, if you really like the dynamic of a young, naive boy stumbling into a superpowered agency, then there's a good chance you will be entertained by both series.

Bungou Stray Dogs is a bit more action based, while Karneval focuses more on the relationships between all the different characters. Nevertheless, both series contain their fair share of each.

I'm not saying these series are exactly alike, and that everyone who likes one will automatically like the other; but if the differences in genre aren't an immediate turn off to you, I think it would be worth a shot to try reading them both.

When a stray black cat named Kuro crosses Mahiru Shirota’s path, the high school freshman’s life will never be the same again. Kuro is, in fact, no ordinary feline, but a servamp: a servant vampire. While Mahiru’s personal philosophy is one of non-intervention, he soon becomes embroiled in an ancient, altogether surreal conflict between vampires and humans.

Naturally, the storylines are quite different, but if you like your bishōnens with a bit more superpowers and action, tt would be safe to give either of these series a go. Both are relatively lighthearted, although there a moments of backstory that reveal tad darker layers to the plots.

Supernatural creatures live alongside humans, but these "rares" are being hunted to extinction over time. An organization is being formed to protect these rares, and allow them to live their lives as they like. The starting members of this organization are few; there's the masked Fukumen, the Black Vampyr king AxL, and they are soon joined by the sweet-voiced mermaid Mirror. Together, they will protect the rares from the deadly hunters!

Anna is a young vampire that adores anything and everything cute, especially fluffy animals, which she turns into adorable minions to service her every whim. Thus, when the circus comes to town, promising a menagerie filled with exotic animals, Anna just can’t resist a visit!

A boy known as Dorotabo is avoided by the people who surround him, and Inugami is a detective who specializes in the occult. Their story begins with Inugami arriving at the boy's town to investigate a case where many cattle are dying and their bodies rot in just one night.