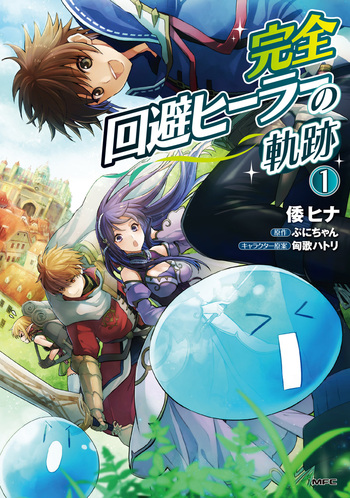 This is the story of the 'Evasion Healer' Hiroki, a gaming addict who is summoned to another world with a stat point distribution system, gets the "Priest" job with a high skill level for healing magic, and dumps all his other stat points into evasion to become "the ultimate dodgetank" - completely ignoring the possibility of undodgeable magic attacks, environmental damage, monsters that damage you when you hit them and other such ideas, while keeping his defenses at a level where a slight breeze will kill him.

The dumbass then joins the guild, proceeds to ignore the receptionist's warning that no party will want him because most healers who have put stat points in non-healing related stats suck, and goes around asking people if he can join while never mentioning he is good at healing...

The very way the evasion stat is shown to work, is already infuriating as well: it's not like a "speed" stat where one needs to actually try to dodge, but rather a passive stat where things just miss you while you ignore it. On top of that, the author seems to have forgotten about other stats entirely. He shows a status window of a mage with magic over 100 and accuracy of... 1 (one!). Pretty sure that mage should never hit anything according to the internal logic, but she hits things anyway.

Apart from these problems, there's not much interesting to say about this manga, positive or negative. It's a pretty generic fantasy isekai, and nothing much has happened yet. We don't really know most of the characters beyond a very basic outline, and the art is ok without being special.

Try it if you're an isekai-junkie and can't find any manga with a smarter MC.

They've got the problem of wig-hair and characters that don't stand out from other manga. The monsters are drawn pretty cute though, and the best part of the manga involves the monsters swarming around Hiroki as fe casually evades them. Thematically, the manga deals with warped stat allocation. It shows the prejudice that can come from people allocating their stats in ways which aren't traditionally ideal for their class; it's seen as wasting stat points. It also shows how adventuring parties can make the strengths of someone's warped stats shine while covering for their weaknesses by adapting and being willing to change the traditional strategies. I'm specifically thinking of Lucia. Feir original party treated fem like trash, but fe was able to contribute when fe joined a party that was willing to think of ways they could make use of fem. Technically, Hiroki also has mis-allocated stats (at least in the sense of people perceiving feir stats that way), but fe's actually more of an over-powered character with strength both in Healing and in Evasion.

Currently, this manga leans a bit more on the positive side of the scale. Part of that might be that I have a soft spot for isekai. But part of it is that I've found it enjoyable watching Hiroki dancing around the swarming monsters and seeming to have fun. It's silly, and brings a smile to my face. I also appreciate how the manga attempts to get into tactics for adventuring parties, and I hope it continues to explore that. But I do see some signs that it may start leaning more negative at some point: the adventuring itself isn't very novel; there is foreshadowing that Hiroki will learn more spells and become even more overpowered, which isn't very interesting; the political dynamics feel unoriginal; and several of the characters already feel bland, so it could easily start feeling shallow.

it's frustrating that he isn't adding points to his strength stat

TRASH he does nothing but evade. his way of fighting is. My teamates will shoot at me and probably hit the enemy. HE CAN NOTHING BUT EVADE. king should have just shot executed him he to stupid to play in a fantasy world.

This is seriously a shitshow, can someone explaine to me how can a hardcore gamer forget the importance of atck stats, I mean a healer is already a support job which makes the mc naturally dependant on others, other than making up for that weakness he makes it worst by adding every stat Point into evasion, added to that right before he leveled up for the first time he said he needed to make his stats more balanced then right after he got his first start point he went ahead and dumped it in evasion, again which me seriously dumbfounded by how dumb the MC is.

I seriously like the hero more than the MC because the hero jeopardized his freedom for his friend's (MC) freedom by putting on a "slavery bracelet" and then the MC goes and plays adventures with his little friends forgetting every responsibility he had, not putting any risk to level up faster.