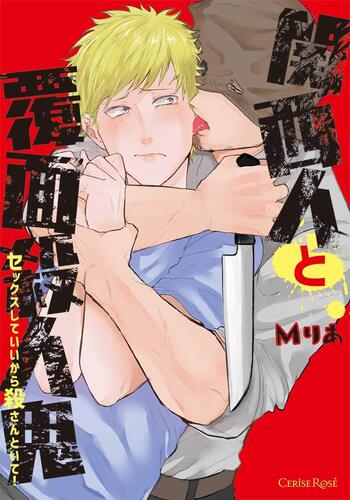 When our protagonist came to an abandoned house to commit suicide, the house owner may have something to say about that.

When our protagonist came to an abandoned house to commit suicide, the house owner may have something to say about that.

Jail Slave Honey: A Straight Salaryman Put Under House Arrest by a Jail-Breaking Brother in Law

Kazuma is a successful business person whose life is going smoothly, but one day, he bumps into an escaped prisoner, and gets taken hostage; moreover, he happens to be Kazuma's step brother! He assaults Kazuma to keep him quiet by restraining his arms and legs, and violating Kazuma. However, the longer he is kept as a hostage, the more peaceful their life together becomes. Kazuma starts to have feelings for him as he knows more about his captor, but the police are about to break their quiet life together...!

When a police officer is posted to a remote village in the countryside, little does he realize he's encroaching on a community of a cannibals...

In the year of 20XX, United Nation Allied Army tries to overpower the Yamato Empire from the Fareast. Colonel Irving of the Allied Army captures a beautiful Yamato lieutenant named Yamamoto. The prisoner’s interrogation quickly turns into a grueling torture, while his captor ends up succumbing to his lust for his mysterious prisoner…

Hunky underclassman Makoto Oribe confessed to college student Hiromi Tanzawa. Half joking, Hiromi responded, “Why don’t you try catching me if you love me!” One day, Hiromi suddenly wakes up...in Oribe’s room! With shackles on his feet, Hiromi’s obviously confined but Oribe rushes to reassure him he won’t do anything until Hiromi loves him back. Unexpectedly stubborn, Hiromi sets one rule: “If you make a move on me, you have to let me go.” Ready to attack using any means necessary to get free, Hiromi realizes Oribe is actually really determined to win...and thinks, “I might be in serious trouble at this rate!?”

A university student is threatened by an unknown old man. "I hate people like you! Your fate is to die," said the man with an undisguised persecution complex. "To escape this hurt, I’ll do only enjoyable things till my end!" he argues, in his extreme desperation. In the midst of his delusions, the man proposes to him, saying, "Do you want to have sex?" while he takes off his clothes. Then, little by little, he begins to find the suffering face of the man cute?! "Welcome home! The rice will be done in 30 minutes, so shall we have sex?" "You should hurry up and escape from here...!" Can love bloom in this lifestyle of confinement?

Living the high school life, being admired by all the other species in his school, Rurikawa (Wolf. Alpha. Male.) meets a lower species, Kyougokuin (Rabbit. Beta. Male.) As soon as their eyes meet, Rurikawa thinks, "I want to breed this beautiful creature." He's suddenly unable to control his urges as he's turned on. In a world where men can also become pregnant, this series tells the story of high school boys being led around by their instincts and fate.

One night, Shou Uraya stumbles upon an eerie creature devouring another person. As he reels in horror, the creature makes eye contact and just as Shou thinks he's next for dinner, he blacks out. The next morning, he wakes up in his own bed, trying to decide whether it was all a dream... but when he arrives to class, he's greeted by a piece of paper stuck to the blackboard that claims one among them is a people-eating monster! As one classmate vanishes after the other, Shou and his classmates are a race against time to figure out the monster's true identity--or they're next!

When Hirose Katsumi discovers that his father's company is in jeopardy as their largest customer, Mimuro, considers moving to other markets, he convinces his father to meet with the heads of Mimuro. Katsumi attends the meeting with his father, and has the unfortunate luck of catching the eye of the heir, Mimuro Yoshitaka. Yoshitaka calls on Katsumi with a deal that will allow the Mimuro Corporation to continue doing business with Katsumi's father. There is one condition, though…Katsumi must put Yoshitaka's needs above all else and do anything requested. With such a tough economy, and so many employees depending on his father's company, Katsumi has no choice but to obey, and begins a life of humiliation as the possession of a cold-hearted Yoshitaka.