Alt title: She Likes Homos, Not Me 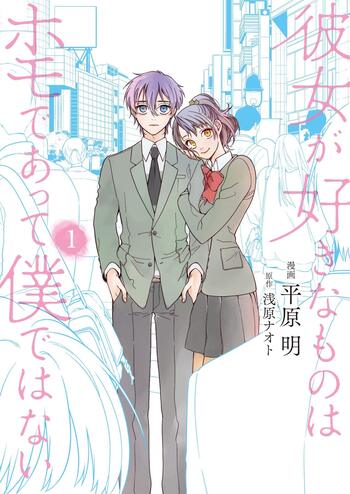 If you're looking for manga similar to Kanojo ga Sukina Mono wa Homo de Atte Boku dewa Nai, you might like these titles.

He is the charismatic singer Kei Kanuma who steals many hearts and eyes. But behind his perfect mask, lies a scandalous sin he committed due to the jealousy over money, lust, and power. Welcome to the most hardboiled picaresque ever happened in Japanese entertainment scene...

Kazuhiko Saibara finds himself dead in the woods surrounding his family's summer villa. As the family servant digs his grave, Saihara's feeble-minded younger brother gazes absently upon the scene, and Saihara himself begins to recount the events that led to his demise.

Makoto does not have it easy. He gets bullied in School and has problems with his father due to skipping school. His outlook on life brightens when Kirisaki, a girl in his class, compliments his drawing skills. A while later he sees her getting harassed by the ringleader of his bullies. He decides to intervene, but is cut short by the revelation that she is the ringleader's girlfriend who incited the bullying in the first place. Depressed by his situation Makoto decides to kill himself. He lands in purgatory, neither Heaven nor Hell with the mission to save the lives of six people, whose life will be negatively affected by his suicide... his father, his bullies and Kirisaki.

Sayu is a 30 year-old high school teacher. She is short, round, cute, but somewhat timid. Her home life is a mess-- her husband is an ass, is cheating on her, and her in-laws are rude and condescending. Therefore, it seems almost like a miracle that she could have an affair. A passionate affair. With one of her students, the handsome and fierce Kou-kun, who is only 18...

Tobio, Maru, Isami and Paisen are a group of friends who are satisfied and complacent with their everyday lives. Tobio, a passive high schooler who makes it a rule not to hope too much; Maru, a scheming boy who gossips behind people's back; Isami, a gaudy student who likes girls and recently got a girlfriend with big breasts; and their senior Paisen (slang for senpai), a 20-year-old man who is rich and has long graduated from high school.

As a child, Yui's busy, working parents didn't have time for him, which led to the boy becoming attached to the mysterious "Nii-chan" who always had snacks and games for Yui to play. The older, predatory man made an advance on Yui, and the boy ran. Now, years later, Yui is a teenager who still can't get over the incident. He decides to seek out his "Nii-chan" to sort out his feelings, and finds him... for better or worse

The sun rays enter the city of light, as various stories unfold:Bright, dark and harsh; a story filled with people from whom you’d want to avert your eyes. Yet, it is close to reality; so maybe it’s true to humanity. Like an old bond between a boy and a girl, a friendship is born between girls who rarely speak to each other.A man who dirties his hands for money, and the girlfriend who waits for him to come home.