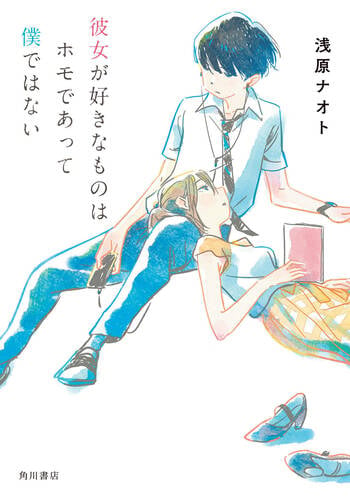 If you're looking for manga similar to Kanojo ga Sukina Mono wa Homo de Atte Boku dewa Nai (Light Novel), you might like these titles.

Our Dreams at Dusk: Shimanami Tasogare

Not only is high schooler Tasuku Kaname the new kid in town, he's also terrified that he's been outed as gay. Just as he's contemplating doing the unthinkable, Tasuku meets a mysterious woman who leads him to a group of people dealing with problems not so different from his own. In this realistic, heartfelt depiction of LGBT+ characters from different backgrounds finding their place in the world, a search for inner peace proves to be the most universal experience of all.

"My body is female, but inside I am male." High school student Ryuu, while struggling with dysphoria and acceptance, meets Jin, a man who loves clothes, and his life starts to change.

Natsume Makoto, a college student, started dating a person while hiding her love for yaoi. She eventually mustered the courage to come out of the closet, but it turned out her boyfriend, Sudou Kojirou, also loves yaoi. Moreover, he's the complete opposite of Makoto...Their relationship is still developing, but their lives as otaku does not slow down. Also around them, unique "yaoi otaku" friends are gathering together...!?

Although they were never close during their school days, Mitsuo Ichikawa and Mitsuo Ichikawa were deeply drawn to each other due to their shared name. Even years later, this bond survives, so when one Mitsuo accidently kills a woman, he calls upon the other to help him dispose of the body. In the aftermath, the two rekindle and advance their relationship, but can their love survive the turmoil of ex-girlfriends, drugs, and crime syndicates?

Toru is a shy and quiet student who has developed a special crush on his close friend Ryoji. Toru hides his feelings, but in a sudden moment Ryoji confesses a secret desire for Toru. Dazzled, Toru quickly accepts his offer. As time passes, Toru's happiness begins to fade knowing that his affair with Ryoji was just a fling based out of Ryoji's sexual curiosity. Toru confides in another one of his close friend, Kashiwazaki, about his dilemma. The two set off to devise a plan to test Ryoji's true intentions by faking a romantic relationship. Both Toru and Ryoji have hidden their feelings from each other in the past, but now they have discovered that they were not the only ones. Will Toru and Ryoji be reunited or will their true feelings for each other go unfulfilled?

Chronicles the events leading up to the development and eventual downfall of the Hikari Club.

Three boys in junior-high who cross-dress because of differing reasons meet each other through a cross-dressing community website, and decide to meet up in real life. "Parou" started cross-dressing because he wanted to attract a heterosexual boy he liked. "Marika" is transgender and identifies as female. Lastly, "Yui" is an antagonistic boy who adopted the persona of his older sister after her death. In contrast to Parou and Marika, Yui is sorely disappointed at the meeting.