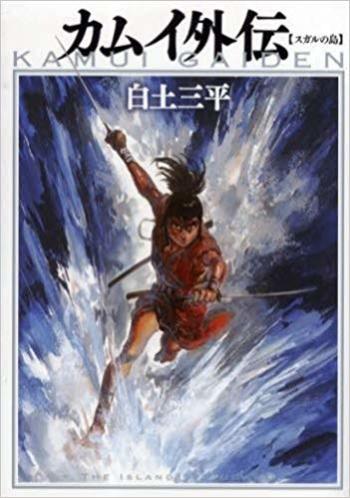 If you're looking for anime similar to Kamui Gaiden: Sugaru no Shima, you might like these titles.

The battle for succession that continued for three generations of shogun in the Keichou era culminated in a gruesome battle of ninja arts between the Kouga and Iga clans. Amidst a rain of flower petals, a man and woman who had decided to live for love were separated once again, beautiful in their transience.

The four teenagers left the academy to find the truth and solve the mystery of their births. They experience all kinds of difficulties and dangers and finally grow into men of honor.

For the citizens of Kuruda, fighting is everything. From ordinary citizens to the all-powerful fighters known as Sevaars, each day revolves around winning each battle and being the best, all for pride and honor. Gau Ban (commonly known as Black Howling) and Elle Ragu are two of these fighters, looking to gain their strength and master the legendary Shadow Skill, even if it means having to fight each other in the process...

Horobi no Ko starts with a flash back to Riki's childhood displaying the terrible fate of his mother and how he himself was taken away from his twin brother Nachi during a game of hide-and-seek, with Nachi's plaintive cry haunting him through the years. Riki has a six-pointed star emblazoned on his hand, while Nachi has a swastika on his, the significance of which go unexplained. Riki finds himself in the town of Misaki, dotted with illegal nuclear power plants and run by a religious fanatic military organization called God's Judgment. He is taken prisoner and made to fight in gladiatorial matches in a sprawling arena. He finds his brother, whose special powers have given him the name of "Savior," but his reunion with his resentful sibling turns sour rather quickly.

Fist of the Blue Sky

Kasumi Kenshiro, also known as Yan Wang or the King of Death, is a Tokyo professor and the 62nd successor to the deadly assassin art known as Hokuto Shinken. He leaves his teaching job and travels to Shanghai after getting word that his old Qing Bang Triad friend, Pan Guang-Lin, and his friend's sister and Kasumi's love interest, Pan Yu-Ling, are in trouble. While in Shanghai, he encounters and fights the three families of Hokuto: Hokuto Sonkaken, Hokuto Soukaken, and Hokuto Ryuukaken. He does all this while revolting against the corrupt Hong Hua Triads to restore honor and power to the Qing Bang.