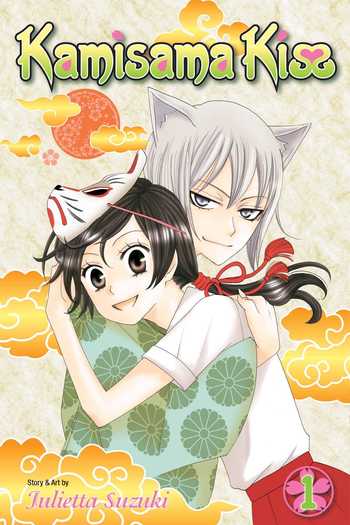 Not sure if this manga is continued or not but it's listed as complete.

the story, however, is not finished yet, far from so, in fact, it's left on a cliff hanger.

the story itself is pretty interesting and I enjoyed reading it. It also has many characters that  Fit well within the story.

Although I gave this anime an overall 8 when placing it under criticism and scrutiny I personally give it full marks and fully recommend it, especially after watching the anime.

THIS IS BY FAR THE BEST MANGA!

This is such a fantastic shojo love story, Ive read it way too many times. This is a must read! ( you should watch the anime too). The story follows a homeless 16yo that comes across a strange man in the park (its not perverted I swear) then one thing leads to another and she ends up as a shrine god of marriage. She faces many challenges but with the help of her friends she ends up saving the day.

Everything should be sealed with a Kiss!

First, let me be clear: I am very, VERY biased towards this manga, for a number of reasons. It literally ticks every box for what I look for in a romance, and it does so incredibly well. The supernatural element blends seamlessly with the modern setting, and the story just keeps you captivated.

The story itself is actually really original. I've only seen a few others with similar stories, almost all of them came out after Kamisama. The best description I can give without spoiling too much is that it's like modern Inuyasha, but with an emphasis or romance as opposed to action. Even then though, that comparison isn't the best. Also of note is that it lasts a bit longer than most shojo series. The typical length I've seen is about 5-15 books, while Kamisama has a total of 25 volumes plus a fanbook with an additonal chapter. So you'll have plenty to read!

The characters... Oh man the characters. I love all of them. Even the most minor characters in the series have mini-arcs of their own, so you feel attached to all of them by the end. My personal favorites are Tomoe (because he's a beautiful Tsundere fox boy) And Kayako (Because she's the literal worst and I love that.) But you end up loving all the characters by the end.

Really, my only issue with the series is the art. Oh the art. Sometimes it's so amazing! But then someone turns to the side, and you get these really awkward profile views of their face, where they either look squashed or their nose is way too high. Aside from those though, the art is typically quite good, and like most long running manga, it gets smoother over time. (Though I would argue that I slightly prefer the bolder, black and white style of the original as opposed to the lighter, breezier style that it developed into.)

Overall, if you're a fan of supernatural romance, or you're fresh off the heels of watching shows like Inuyasha or Fruits Basket, I think you'll enjoy this series a lot!

Underrated. Beautiful and refreshing story. Best manga of all i have read.